China's cooperation will continue with Maldives for mutual benefit: experts

A number of cooperation projects between China and the Maldives under the Belt and Road initiative have been underway in recent years. 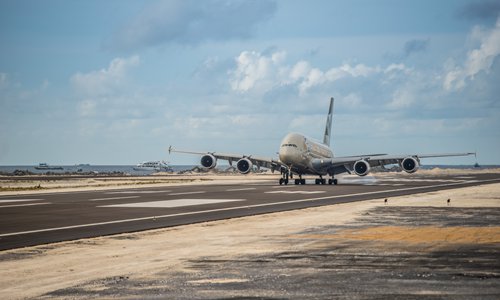 An A380 airplane successfully took off from the newly constructed runway at the Maldives' Velana International Airport on September 18, marking the completion of a Belt and Road initiative project.The runway project was contracted by the China-based Beijing Urban Construction Group.However, the result of recent presidential election in the Maldives has cast some doubt on whether cooperative projects would continue smoothly, as some Western and Indian media outlets predicted that the Maldives' incoming administration will adjust its diplomatic policy.Ibrahim Mohamed Solih won the election in late September and will be sworn in as Maldives' next president on November 17.The newly elected president has been widely viewed as an ally of India, whereas the current president Abdulla Yameen is closer to China.The Guardian newspaper conjectured that the win has geopolitical implications, with Solih promising to restore relations with India, and rely less on China, which has the wealth and willingness to fund the country's development.However, various voices from both the Maldivian government and the public told the Global Times that China-Maldives relations will not see a negative change despite the Maldives' political shift.An unnamed official with the outgoing Yameen administration told the Global Times that the opposition coalition led by Solih is pro-India, but Solih himself is moderate.The official believes that the existing diplomatic policy made by the current administration will undoubtedly see some adjustment after Solih takes office, but Solih will not refuse trade or investment from China.A senior official of the China-Maldives cultural association told the Global Times that the new Maldivian government will support Chinese enterprises to develop and invest in the country, because it conforms to the common aspiration of the two sides. The future is still full of hope.Geng Shuang, a spokesperson of China's Ministry of Foreign Affairs, said at press conference on September 25 that China congratulates the Maldives' smooth holding of the presidential election and Solih's election as the president. "China is willing to work with Maldives to continue to cement traditional friendship and deepen mutually beneficial cooperation so as to deliver benefits to the two countries and two peoples," the spokesman said.Benefit for both sides Long Xingchun, an associate professor of China's West Normal University, said that during president Yameen's tenure, China and the Maldives enjoyed close cooperation, including signing a free trade agreement and the construction of the China-Maldives Friendship Bridge. All these projects were achieved based on the Maldives' demand for development and the principle of mutual benefit, not because the Yameen administration was "pro-China," according to news website cankaoxiaoxi.com.The runway project at Maldives' Velana International Airport is an example. The new runway is a part of the airport's expansion project together with a new cargo complex and a terminal for seaplanes. The expanded airport will see a big improvement in passenger capacity and create large numbers of jobs in the Maldives, boosting the country's development in both economy and tourism."It is worth mentioning that cooperation projects between China and the Maldives are made in infrastructure construction and tourism, and China and India do not compete with each other in these two sectors," said Long.Long pointed out the incoming Solih administration will make some adjustments of the Maldives's diplomatic policies, and enforcing cooperation with India is an option for the new government, but it won't affect Maldives' relations with China. China-Maldives cooperation has a long history and fruitful achievements, and the general trend of mutually beneficial and win-win development will not change, no matter who garners power, added Long.In regard to the foreign media's reports on how China's Belt and Road projects were affected after some countries' governments changed in recent years, Long said cooperation in the Belt and Road framework might encounter those changes. Chinese enterprises should safeguard their legitimate benefits according to international law in case problems occur.