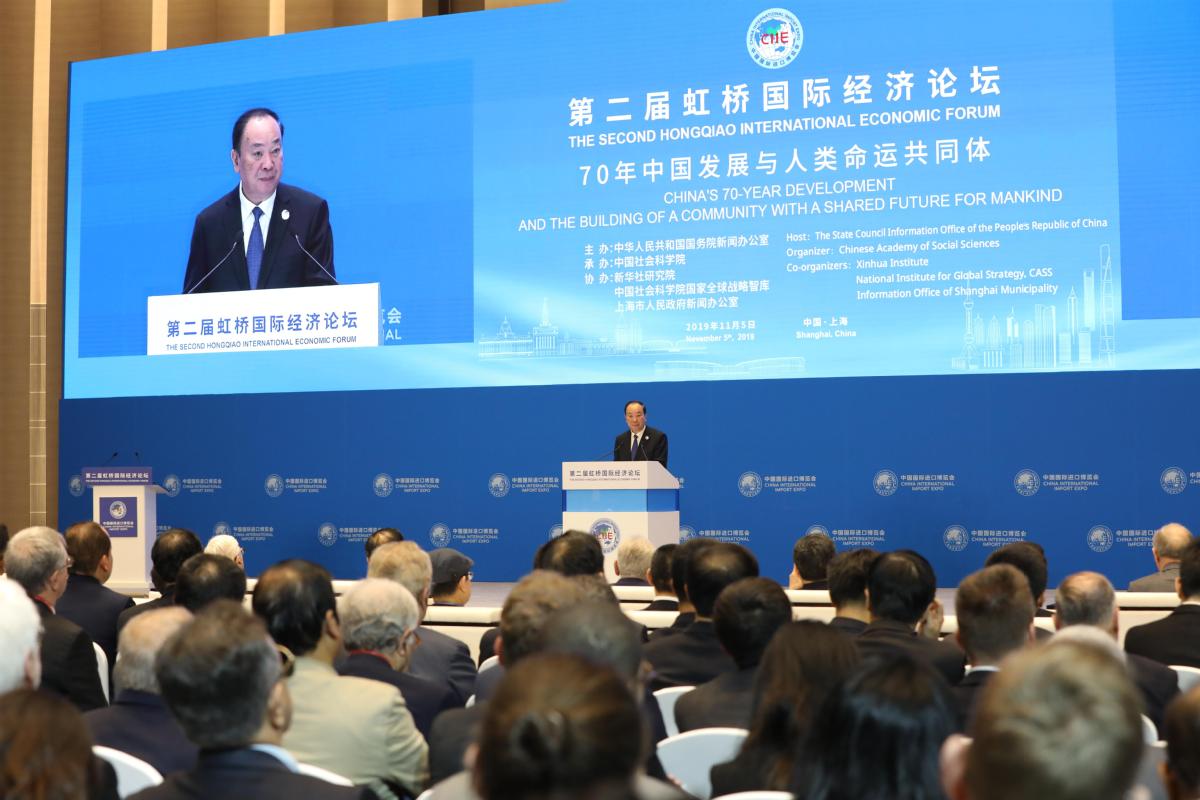 Huang Kunming, head of the Publicity Department of the Communist Party of China Central Committee, delivers a speech at a parallel session of the second Hongqiao International Economic Forum in Shanghai on Tuesday. (Photo: China Daily)

Think tanks and media institutions can be advocates of world peace and development, disseminators of the concept of win-win cooperation, and promoters of common progress for mankind, a senior official of the Communist Party of China said on Tuesday.

President Xi Jinping's keynote speech at the opening ceremony of the second China International Import Expo demonstrates China's confidence and resolve to further open up, Huang Kunming, a member of the Political Bureau of the CPC Central Committee and head of the Publicity Department of the CPC Central Committee, said when addressing a parallel session of the second Hongqiao International Economic Forum.

It also underscores China's strong sense of responsibility to work with the international community to build an open global economy and a community with a shared future for mankind, he said.

In his speech at the expo, Xi presented the prospect of jointly building an open world economy through cooperation, and outlined the next step of China's opening-up policies.

Since the founding of the People's Republic of China 70 years ago, the country has not only achieved its own development, but also brought more opportunities and vitality to the world, Huang noted.

Featuring the topic of China's 70-year development and the building of a community with a shared future for mankind, the session attracted more than 400 people from think tanks and media circles in over 100 countries and regions.

Some foreign speakers at the session said that the Belt and Road Initiative is the epitome of China's commitment to benefit people elsewhere while realizing its own development.

Former Serbian president Tomislav Nikolic said that China has proved to the world that the BRI has provided fresh ideas and practices for international collaboration.

"The success of the BRI lies in fully taking into consideration the political and cultural differences of various countries, and China will not collaborate with different countries in the same uniform mode. Instead, countries can negotiate with China from their own specific national condition," he said.

"The BRI has brought an unprecedentedly large number of business people from China to our country, resulting in contracts totaling 10 billion euros ($11.1 billion)," Nikolic said.

"China's developing orientations are in the right direction for the needs of the times. China's stance is of historic significance to shoulder challenges and provide opportunities for people around the globe," he said.

Luigi Gambardella, president of ChinaEU, a Brussels-based international association that promotes digital and internet cooperation, said that a common observation of China from the global community is that its collaborative approach with other countries is very friendly.

"Business is a way to remove barriers. It's a common view of many European countries that the relationship with China is of great significance and will bring win-win opportunities for countries on both sides," he said.