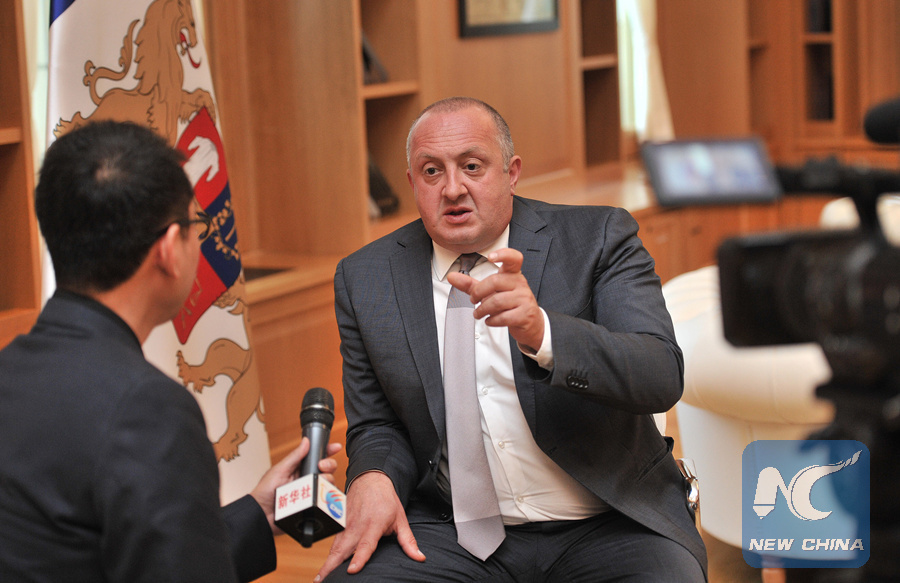 Georgia believes China's development is a rare and great opportunity for Georgia and the world at large, with Georgia being ready to further enhance cooperation in all fields, Georgian President Giorgi Margvelashvili has said.

"We look at China's development as a rare and great opportunity, instead of a challenge, for the world. That is why Georgia signed a free trade agreement last year with China," the president told Xinhua in a recent exclusive interview at the presidential palace.

Margvelashvili noted that China is an "important and interesting" actor in the global politics and economy, contributing greatly to world peace and stability.

"When we talk about conducting economic or cultural dialogue between different nations, we can't ignore China, which is one of the strongest states, economically, militarily and demographically," Margvelashvili said, stressing that China plays a unique role in the current global arena.

He said relations between Georgia and China "has been developing toward a very proper direction," adding that fruitful results have been achieved in cooperation since the two countries established diplomatic relations in 1992.

He said the two countries have forged a very reliable and productive partnership politically, economically and culturally.

"We two countries have developed a good long-term relationship, supporting each other politically and cooperating economically," Margvelashvili said, stressing that the support from China is crucial to Georgia because of China's unique role in the United Nations.

The president also spoke highly of the free trade agreement (FTA) between the two countries signed last year, hailing it as a great economic achievement that is significant for Caucasus country's future development.

The China-Georgia FTA, inked in May of 2017 and effective since January 2018, will cancel import tariffs for 93.9 percent of Georgian products sold to China. Reciprocally, 96.5 percent of Chinese products entering Georgia will be duty-free.

Meanwhile, the president pointed out that cultural exchanges have been active in recent years, evident in the growing popularity of the Confucius Institute in Georgia.

As for the Belt and Road Initiative, which China proposed in 2013 to promote worldwide connectivity and trade through infrastructure construction and investment, Margvelashvili said it is a great and visionary concept which will benefit all the countries along the ancient Silk Road.

"Talking about the Belt and Road Initiative, which is great and visionary, I think Georgia is one of the leading countries in cooperation with China to develop this project in the region," he said, adding that Georgia is "very committed to this initiative."

"Georgia has started to develop our own portion along the Silk Road. Our task is to boost this inter-continental cooperation with our Chinese partner," Margvelashvili said.

He said Georgia is ready to join hands with China and engage in taping Georgia's unique potential in building the Belt and Road.

"If you look at the projects within the Belt and Road Initiative, you will find there are many routes. But the Georgian route is one of the easiest and most interesting," Margvelashvili said, adding that Georgia can help diversify the trade routes and provide the access to the Black Sea.

"As your partner, we are glad that the Chinese friends are always visionary and far-sighted. It will definitely benefit our future cooperation," he said.