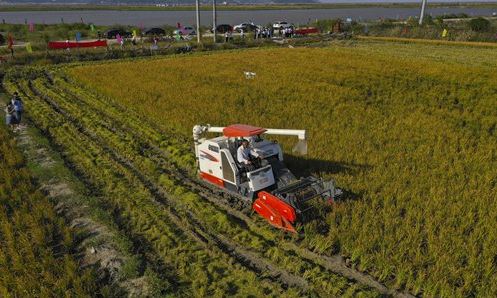 China can produce enough grain on its own to feed its people, but while maintaining food supply security, it will also expand agricultural cooperation with overseas countries, especially countries and regions along the route of the Belt and Road initiative (BRI), an agricultural official has said.Experts noted on Friday that China can rely entirely on self-production for main crops, but that for certain farming products, it would be good to have more sources of imports in case there are any significant changes in trade status. Han Changfu, China's agriculture minister, was quoted by a Xinhua report on Thursday as saying that he's "sure" China will have a good grain harvest this year.Following an increase in the sowing area for autumn grain in China, the nation is likely to produce more than 600 million tons of grain this year, a high amount by international standards and a level that China has maintained for six consecutive years, Han said. The relatively high production means that China can guarantee the security of its main crops, analysts noted. "For staple food such as wheat and rice, China's current supply exceeds demand, which means that we can rely entirely on self-production for domestic supplies," Jiao Shanwei, editor-in-chief of cngrain.com, a website specializing in grain news, told the Global Times on Friday. More sources neededThe reassurance from government officials and industrial experts about food security comes as the rising trend of global trade protectionism affects the trade of agricultural products between China and overseas countries. For example, the ongoing Sino-US trade dispute has resulted in less imports of soybeans from the US to China in recent months. "There have been hardly any new orders from domestic buyers to purchase soybeans from the US in recent months," Jiao said, adding that the Sino-US soybean trade might even stop completely if the trade dispute worsens.According to Jiao, it's still hard for China to rely entirely on domestic soybean supply because of geographical limitations, and therefore the country should multiply its soybean import sources to make up for the reduction in supply from the US. "Russia and Africa are good alternative sources," Jiao said. "As long as China maintains trade relations with major existing soybean sources like Brazil and actively seeks new partners, the US trade dispute won't be a very big issue," he said. Overseas countries are also trying to get a share of China's agricultural market by increasing their farming exports to China. For example, India is now competing with Pakistan, a traditional rice exporter to China, to gain a bigger share of China's rice market, a sputniknews.com report noted on Thursday. But while it would be good to have more import sources, experts nevertheless cautioned that China should control the scale of imports, particularly for certain crops that China is capable of producing itself, so as to prevent oversupply. "With some crops, like corn and barley, China has imported more than was needed in the past few years just because the products were cheaper in overseas countries. This affects domestic crops and harms the motivation of Chinese farmers," Ma Wenfeng, a senior analyst at Beijing Orient Agribusiness Consultancy, told the Global Times on Friday. Ma also said that the government can help domestic farmers increase productivity through greater industrialization."With industrialization and mass production, we won't be worried if we don't import food products from the US," he said.