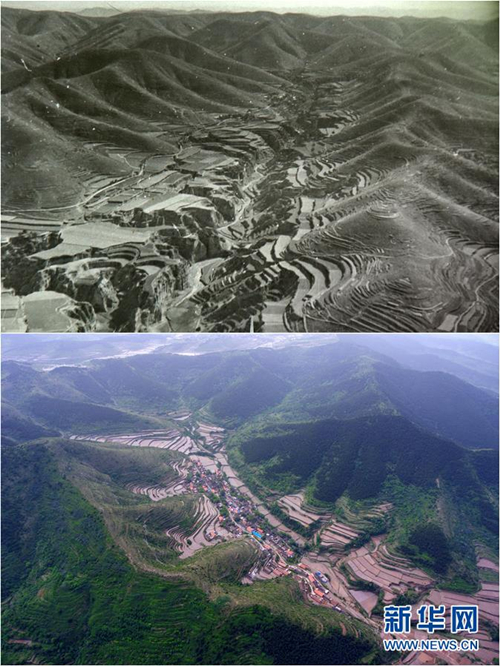 A comparison showing Huguan county, Shanxi province, before and after 40 years of afforestation. (Photo: Xinhua)

Experiences gained from 40 years of forestation in North, Northwest and Northeast China could be helpful to other developing countries and China would like to share its experiences with them, a senior forestry official said Friday.

As the largest ecological engineering project in the world, the Three-North Shelter Forest Program kicked off in 1978, placing forest windbreaks in 13 provincial areas in North, Northwest and Northeast China. The planned afforestation area will be 35.08 million hectares between 1978 and 2050, and the forest coverage rate in the project area will rise to 14.95 percent by 2050, up from 5.05 percent in 1978.

Thanks to 40 years of efforts, the forest coverage rate in the project area had reached 13.02 percent by the end of 2015, according to official data provided by the bureau.

Most of the project area used to suffer from desertification and serious soil erosion. But since the project entered its fifth phase starting from 2011, the hazards of sandstorms and the serious situation of water and soil erosion had been alleviated, said Zhang Wei, the bureau director, at a symposium.

"We can clearly see how the engineering construction played a major role in preserving the water and soil protection by reducing the sediment that flew into the Yellow River," Zhang said.

Although farming fields were converted to forests, this has not sacrificed farmers' incomes, according to Peng Youdong, deputy head of the State Administration of Forestry and Grassland.

Three main forestry and fruit bases had been built in the Loess Plateau, Xinjiang and Yanshan Mountain areas, which lifted 4.33 million people out of poverty by the end of 2015, he said.

"We hope to promote international cooperation in forestry and grasslands with more countries in a wider range," Peng said.

Foreign diplomatic envoys who attended the symposium said that the ecological defense of China's Three-North areas set a good example for other developing countries in preserving harsh environments' ecological protection and changing the terrain.

"Poverty alleviation and social development had been an important part of our country," said Fernando Lugris, Uruguay's ambassador to China. "China is helping us to solve the current issues and we would love to work together with the Chinese government for further development in sustainable use."

"A combination of planting trees also provided an effective way for our country to solve the ecological issues and to preserve the water and soil," Silimela said.