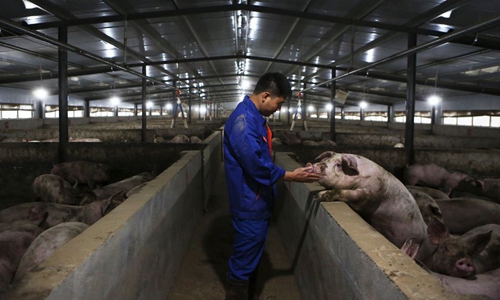 China's hog production saw recovery in December 2019, with the percentage of pigs available for slaughter up 14.1 percent from November, said Yu Kangzhen, deputy head of the Ministry of Agriculture and Rural Affairs, on Wednesday. December marked China's first rise in hog production since August 2019.
The steady rise of China's hog production capacity is also reflected in the country's stock of breeding sows, which rose 2.2 percent in December, a third consecutive monthly rise, Yu noted during a press conference.
"Generally, last December's hog production improved, laying a firm foundation for this year's work to speed up the recovery," Yu said.
However, Yu also said that the African swine fever (ASF) situation in China remains "complicated and severe." The pig epidemic was first detected in China on August 3, 2018.
Yu said the ministry has thus far received 162 reports of ASF, and 1.2 million hogs have been culled in an attempt to stop the spread of the virus.
As of Wednesday, Southwest China's Yunnan Province is the only province that hasn't lifted a blockade on hogs. All other provinces of China have announced a lift.
In 2019, China saw 63 reports of the virus nationwide and culled 390,000 hogs, according to Yu. He said the situation is severe globally. "27 countries have received more than 14,600 reports of ASF."
The latest statistics are a signal for Chinese hog producers to increase their supply of pork before the upcoming Spring Festival, Li Guoxiang, a research fellow at the Rural Development Institute of the Chinese Academy of Social Sciences, told the Global Times on Wednesday.
"China's hog production is recovering and pig farms do not need to worry about a drop in the industry later, as their current livestock will become available meat after the festival," Li noted, saying the speed of China's hog production recovery has been unexpected.
He credited this to effective national hog-revitalization policies and the currently profitable hog market, but warned that "the ASF situation has many uncertainties and hog producers should not take that lightly."
Last year, the central government provided subsidies of 300 million yuan ($43.2 million) for large pig farms, and another 220 million yuan in subsidies for culls.
According to the ministry's website, the average pork price in China's wholesale agricultural markets hit 44.65 yuan per kilo on Friday, more than twice compared with the price in January 2019.