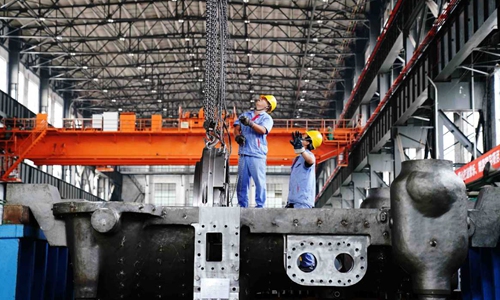 However, persistent downward pressure on the world's second-largest economy could prompt more measures to boost liquidity, with a further cut to the reserve requirement ratio (RRR), cash that banks are required to hold as reserves, widely expected.

Industrial profits grew 5.4 percent year-on-year in November, compared with a 9.9 percent decline in October, according to the National Bureau of Statistics (NBS). In the first eleven months of the year, profits dropped 2.1 percent year-on-year, recovering from a 4.9 percent fall in the January-October period.

"Overall, some of the industrial companies are seeing structural improvements," Li Daxiao, chief economist at Shenzhen-based Yingda Securities, told the Global Times on Friday, "I think the downward cycle might be coming to an end slowly."

Chinese stocks were mixed at opening on Friday morning following the improved figures and on the expectation of RRR cuts. The Shanghai Composite Index was down 0.02percent and the smaller Shenzhen Component Index edged up 0.22 percent at market opening.

Li attributed the slight improvement in industrial profits to a slew of measures, including a nearly 2 trillion yuan ($285.7 billion) cut in taxes and administrative fees for businesses. "This is in line with several other positive signals for improvement in the economy," he said.

In November, the purchasing managers' index, an indicator of factory activity, rose to 50.2 in expansion territory from 49.3 in October. The producer price index, a key gauge of corporate profitability, also improved from a 1.6 percent fall in October to a 1.4 percent decline in November.

The improving signs in the Chinese economy also came as China and the US are working toward a phase one trade agreement that could help to de-escalate tensions after a roughly 19-month trade war. Officials are still working on the final details of the signing of the deal, China's Commerce Ministry said on Thursday.

But as downward pressure lingers and difficulties to raise funds at small and medium-sized firms remain, China's central bank could make another cut to the RRR to boost liquidity as early as Friday, according to media reports.