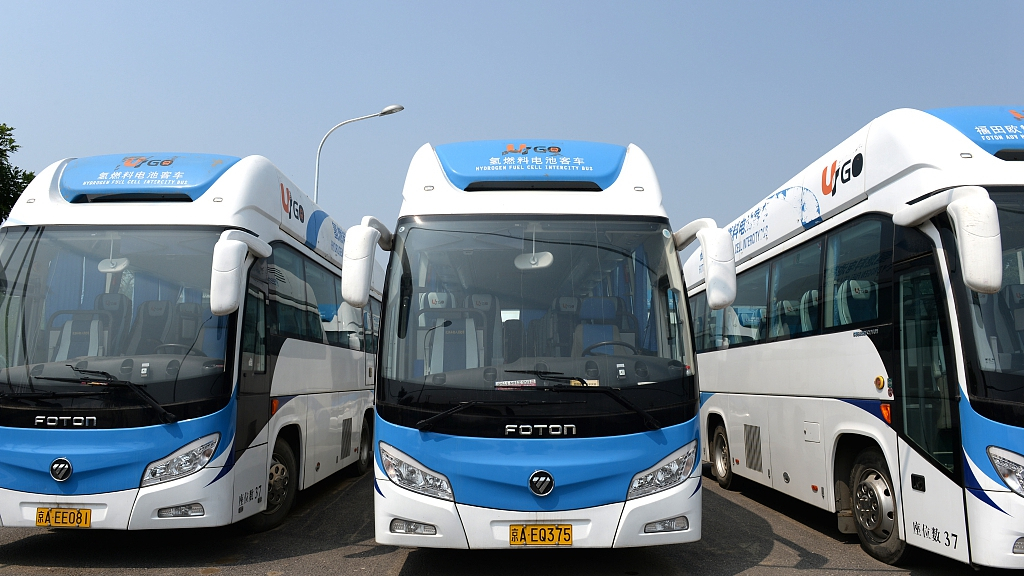 China's installed capacity of hydrogen fuel cells surged 642.6 percent year-on-year to 45,876.9 kilowatts in the first seven months of this year despite a subsidy withdrawal from the new energy vehicles (NEVs) sector, according to industry data.
The output and sales of the hydrogen fuel cell vehicles soared 8.8 times and 10.1 times to hit 1,176 and 1,106 units, respectively, the Power Battery Application Branch of China Industrial Association of Power Sources (CIAPS) said in a report.
The hydrogen fuel cells are still mainly used for powering buses and special purpose vehicles instead of passenger cars, due to the high cost and a lack of technical support facilities such as hydrogen stations, the report said.
China has toughened policies for subsidizing the purchase of new energy vehicles (NEVs) this year to push for the sector's high-quality development.
Since the end of the three-month transition period on June 25, local governments have stopped subsidizing purchases of NEVs except for new energy buses and fuel cell vehicles, and used the funds to improve charging facilities and other supporting services.
Following the news, the sector ended its rapid growth and saw its first year-on-year decrease in years. The NEVs output and sales were down 6.9 percent and 4.7 percent respectively in June compared with the same period last year.
Noting that the new energy buses and fuel cell vehicles are exempted from the subsidy withdrawal, analysts from CIAPS expected the full-year installed capacity of the hydrogen fuel cells to see a substantial increase compared with last year.
"As the sector is still in the preliminary stage and hydrogen fuel cells are considered a significant alternative energy source in the long term, government support will probably persist for a long time," a CIAPS analyst said.