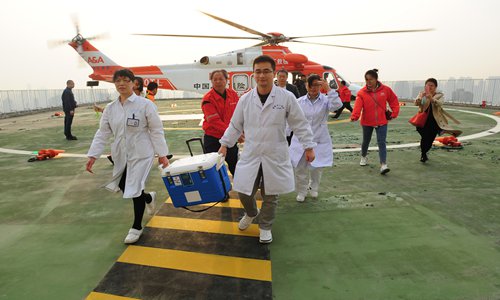 Hearing "Thank you China" from a senior WHO official was one of the most striking moments for Huang Jiefu, head of China's National Human Organ Donation and Transplant Committee and a leading figure in reforms concerning organ donation and transplants that have won increasing international praise.
WHO Director General Tedros Adhanom Ghebreyesus made the remarks in Chinese to Huang after a side event at the 71st World Health Assembly (WHA) in late May.
This was the first time that the WHA hosted a side event on organ transplants. The invitation to have Chinese experts address the forum demonstrated the international community's recognition of China's reforms in this field, noted one Chinese expert attending the event.
"China has entered a new era for organ transplantation and the country is willing to share its experience with the world," Huang, also the former Chinese vice minister of health, told the Global Times on Wednesday.
Huang added that international exchanges in the sector would be strengthened under the Belt and Road initiative and China will continue to contribute its share in global efforts to promote WHO's guiding principles on organ transplantation.
China has made huge and impressive progress on organ transplantation, and the country may play a leading role in promoting the cause globally, Bernhard Schwartlander, chef de cabinet of the World Health Organization, told the Global Times on Wednesday.
Since 2016, Huang has lead delegations of Chinese experts to attend six international events to introduce China's reform and experiences concerning organ donation and transplants.
In 2015, reforms were introduced in China prohibiting the use of organs from executed prisoners and prohibiting foreign patients from undergoing organ transplants in the country. It also established a computerized organ distribution system to ensure transplants are monitored, ethical and transparent.
In August 2016, Huang brought a delegation to the annual international congress of the Transplantation Society (TTS) in Hong Kong. TTS is an organization composed of more than 6,700 medical professionals from over 105 countries and regions.
In March, a Chinese delegation also attended an anti-organ trafficking conference held by the Pontifical Academy of Sciences (PAS) in the Vatican. This was the second such event China had participated after February 2017.
The developments in China represent a "new era of organ donation and transplants" that complies with UN Sustainable Development Goals, read a declaration at the meeting held in the Vatican.
Another of the 72-year-old Huang's mission when attending international events is to clear up ongoing rumors concerning organ donation and transplants in China. "You can only move forward after defeating your enemies," Huang stressed.
In Huang's opinion, rumors such as "there are 60,000 to 100,000 organ transplants in China a year" and "organ harvesting from Falun Gong practitioners" are fabricated by foreign forces to smear China's image for political purposes.
A figure given by Huang showed that from January 2010 to April 2018, 17,085 Chinese civilians volunteered to have their organs donated after death, and more than 48,000 organs were transplanted in China as well.
While China has earned international recognition, Huang said the field still faces challenges in China, as such the next step for reforms is to further improve the country's laws and mechanisms concerning organ donation and transplants.
A high-level mechanism involving government departments in political, health, diplomatic and judicial sectors should be established to ensure progress continues in organ donation, procurement, distribution and transplants, said Huang. Supervision, international exchanges and cooperation, as well as law enforcement to prevent organ trafficking, all need to improve so that China can "bravely walk to the center of the world stage," Huang added.
The Chinese government has implemented a licensing system to authorize transplant hospitals, and is now implementing a national anti-organ trafficking surveillance system.
From 2007 to 2017, some 220 organ trafficking suspects were arrested and more than 100 criminals were brought to justice, Wang Haibo, head of China's official organ distribution system, the China Organ Transplant Response System, told the Global Times.
China is likely to have the highest number of organ transplantations in the world in 2020. The progress made in the sector is not only about safeguarding people's right to health, but also a matter of national image, Huang stressed.