By Eric Biegon | China Plus

The month of May marks the one year anniversary of the Belt and Road Initiative, which was formally unveiled to the world at a colorful ceremony in Beijing in 2017. The event was graced by many heads of state and governments that would later endorse and appended their signatures to the initiative, affirming their own place in China’s grand plan to connect the world.

The initiative first proposed by President Xi Jinping in 2013 has had a huge impact, especially in the developing world, becoming a project of enormous scale and vision. 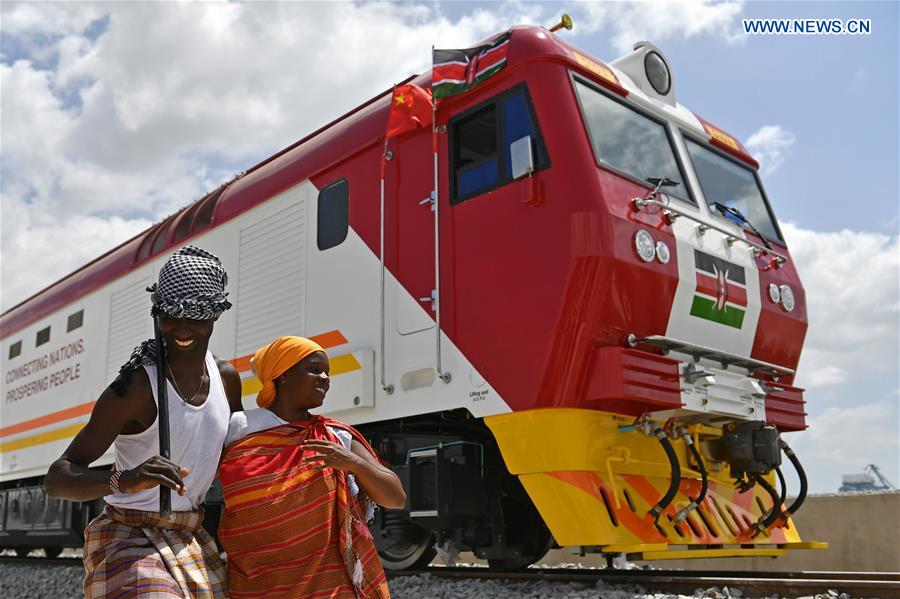 Kenyans sing and dance beside one of the first batch of locomotives for the Mombasa-Nairobi standard gauge railway in Mombasa, Kenya, on Jan. 11, 2017. (Photo: Xinhua)

It’s still early days, but the fruits of this “project of the century” have been seen and felt in areas where its footprints have left a mark in Africa. Kenya and Ethiopia provide clear-cut examples in this regard. Others, like Djibouti, Egypt, Namibia, Tanzania, and Mozambique, to name but a few, are following in their footsteps.

Some of the world’s renowned companies, such as the law firm Baker McKenzie and global real estate giant Knight Frank, have called the initiative a silver bullet for Africa, detailing opportunities presented by the Belt and Road to the continent.

East Africa took the lead by enlisting in the initiative, immediately turning into an important component of it. Countries in this region have benefited from mega infrastructure works following heavy investments in ultra-modern railways, roads, ports, airports, and industrial parks by China.

By coincidence, this month also marks one year since the launch of Kenya’s Standard Gauge Railway, which began operations on May 31, 2017. The Mombasa-Nairobi SGR is now a key hallmark of cooperation between Beijing and Nairobi.

The SGR project, which was financed and constructed by China, is estimated to have so far created 46,000 jobs for local people, reduced the cost of transport, cut travel time between Mombasa and Nairobi almost by half, and boosted Kenya’s GDP by more than 1 percent.

What is perhaps even more remarkable is that since its commissioning, the passenger train, the Madaraka Express, has transported in excess of one million passengers, while cargo trains have ferried more than 300,000 tons of goods. Kenya Railways has placed orders for more cargo and passenger trains to meet the high demand.

These efforts under the Belt and Road Initiative will enhance Kenya’s capacity for self-sustainable development, and speed up the country’s industrialization, while creating a large number of job opportunities.

China’s government is also offering hundreds of scholarships to Kenyan students every year to study in China. And to further promote closer people-to-people exchanges, it has been encouraging its citizens to make Kenya their choice for a holiday destination.

In Ethiopia, 15 industrial parks built with Chinese money and expertise will be fully operational by June. About half of these parks are located along the Addis Ababa-Djibouti electrified railway line built by China. The railway line will speedily transport products made in the industrial parks to ports in neighboring Djibouti.

The 756-kilometer railway, which recently started commercial operations, has significantly reduced the time it takes to transport Ethiopian goods to ports in Djibouti and vice versa from 48 hours down to approximately 10 hours.

There is no doubt that this will boost Ethiopia's prospects of becoming a manufacturing hub in Africa by 2025.

In Tanzania, construction is set to begin on the 10 billion U.S. dollar Bagamoyo port project. The Tanzanian and Chinese governments have finally hammered out a deal that paves the way for the commencement of the project, which has been hampered by delays.

The state-owned China Merchants Holdings International and Oman's State General Reserve Fund are teaming up with the Tanzanian government to develop what many believe will be one of the biggest ports in Africa.

In a report released by World Bank in 2016, inefficiencies at the Dar es Salaam port cost Tanzania and its neighbors up to 2.6 billion U.S. dollars annually.

In Egypt, a Chinese green energy company has started constructing of one of the biggest solar power plant in North Africa. The project, with an output of 186 megawatts, is expected to be completed by mid-2019.

The project, made up of four solar power stations, has been earmarked to generate up to two gigawatts of utility-scale solar capacity.

Belt and Road projects are also taking shape in the southern part of Africa. In Namibia, Chinese companies are helping the country to realize its ambition to become a logistics hub. China Harbor Engineering Company is building a new container terminal and oil jetty at the port, as the country seeks to establish a gateway to the southern African region.

In Mozambique, the Chinese-built Maputo Bridge is set to open in June. The southern African nation hopes the project will become the nation's international passageway to South Africa.

The present state of affairs in the highlighted countries is proof that the multi-billion dollar framework of the Belt and Road Initiative gives Africa the grandest of opportunities to take on decades-old challenges such as backward infrastructure, a skills shortage, and inadequate financing for projects, which have greatly contributed to its under-development.