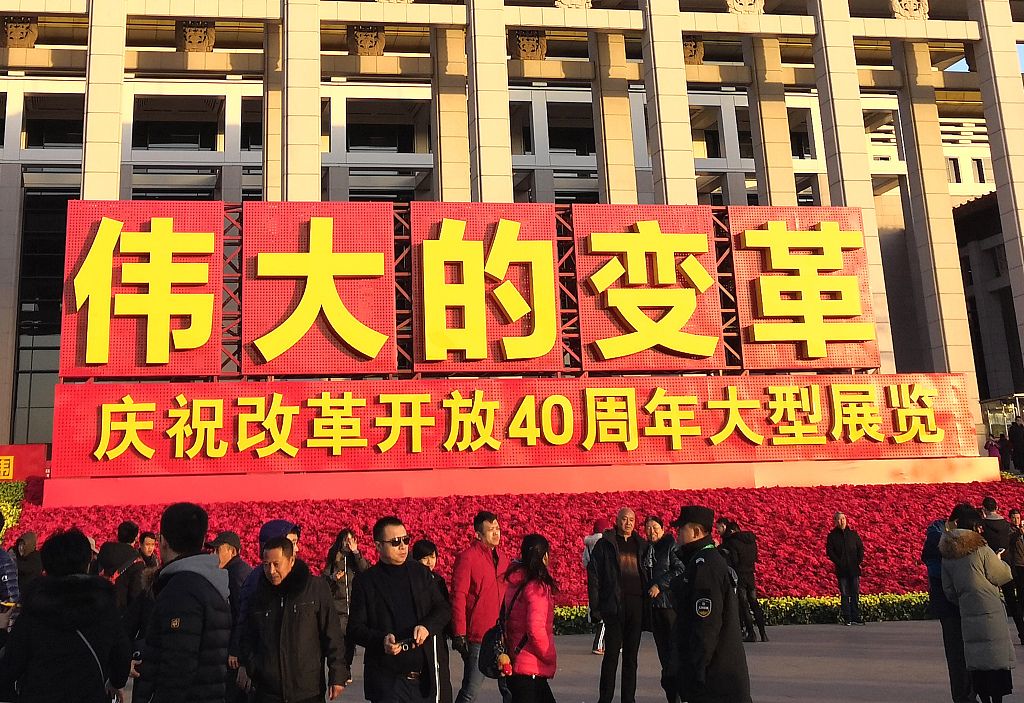 BEIJING, Dec. 17 (Xinhua) -- China's reform and opening-up that started 40 years ago was the start of its endeavor to achieve common development as well as closer ties with the rest of the world.

What China could do to serve the world formed part of the deliberations when the reforms were still being discussed. In October 1977, then Chinese leader Deng Xiaoping told foreign guests that only when China changed its backwardness would it be able to make greater contributions to mankind.

Senior U.S. diplomat Charles W. Freeman Jr. was immediately aware of a "revolution" underway in China in the summer of 1979 when hearing the words "sole proprietor" from a Beijing street vendor from whom he bought a bowl of noodles. He predicted China's rapid rise when he was back in Washington. However, he said he had underestimated the consequent changes in China.

Actually, no one could foresee in December 1978 when China launched its reform and opening-up that the country's sole proprietors would have increased by over 500 times and privately-owned enterprises by 338 times. With an annual average growth of 9.5 percent, China now makes up around 15 percent of the global economy, up from 1.8 percent.

Now every part of its identity, such as being the world's second-largest economy, or largest trading country in goods, shows that the once poor, populous Asian nation has become a driving force in global development and progress, with enormous contributions and influence thanks to the "China Miracle."

The reform and opening-up launched the modernization of China and has changed the whole world, said three-term Spanish Ambassador to China Eugenio Bregolat Obiols.

Poverty alleviation is an important episode in China's success story, said United Nations Development Programme (UNDP) Administrator Achim Steiner. "The achievement China made is outstanding in both scale and time. No other country has done it before," he said about China lifting some 700 million people out of poverty and contributing over 70 percent to global poverty reduction.

Both China and the world benefit from the efforts, said former UN Secretary-General Ban Ki-moon in late November, while praising China's reform and opening-up for having brought about incredible achievements.

Currently, the world's future common development is taking shape partly with China's shift to high-quality growth in its new round of reform and opening-up, a growth based on innovation, coordination, green development, openness and sharing.

NEW PATH OF COOPERATION AMID CHALLENGES

The China-Maldives Friendship Bridge in the Indian Ocean is a Belt and Road flagship project. In regions beyond, plenty of similar projects are forging closer bonds between countries and peoples while substantiating win-win cooperation marked by mutual benefit.

The China-proposed Belt and Road Initiative has evolved into the largest platform for international cooperation five years after its launch, epitomizing China's thinking concerning development, diplomacy, global vision and international responsibility -- a sum total of the four decades of the country's reform and opening-up.

The reform efforts also helped China develop its answer to a frequently asked question in the West: Does the awakened lion in the East bring opportunities or harbor threats for the world?

The Chinese answer features a commitment to the path of peaceful development and breaking away from the old Western mindset of power resulting in hegemony, and a strong political will to seek shared benefits through consultation and collaboration. China aims for a new type of international relations as well as a common community with a shared future for mankind.

Aftab Siddiqui, founder of Britain's China-Pakistan Economic Corridor Working Group, said China's increasingly deep involvement in international affairs over the years has helped it exert global influence, in addition to setting an example in terms of its peaceful approach, which pursues consensus while objecting to interference in other country's internal affairs.

Amid new challenges stemming from a changing world, China has never stopped seeking solutions. Among them was the conclusion that peace and development are both major global trends or the vision of a common community with a shared future for mankind. The past was a testament to China's growth reinforcing the promotion of global peace and development.

China's approach of aligning the country's interests with the rest of the world's is a bid to build a more inclusive, democratic, open, innovative, and efficient multilateral world, the Spanish foreign policy magazine Politica Exterior has said, and is inspiring an increasing number of people worldwide.

The International Free Trade Zone in Djibouti takes up an area about a tenth of the coastal country in Northeast Africa. It is being co-built with Chinese enterprises.

The billboard at the entry reads "Time is Money" and "Efficiency is Life," the same slogans that were once popular in China. The aim is to build a sea transport, financial and trade center in East Africa.

World Bank President Jim Yong Kim said, "Understanding the path China traveled, historical decisions made, and their effects on the course of China's economy can inform decision-makers hoping to achieve similar outcomes in their countries and for their populations."

China's development path offers "an option other than the Western modes," said Zheng Yongnian, director of the East Asian Institute at the National University of Singapore. "Importing no foreign mode while exporting no Chinese mode -- this is itself something globally significant," he added.

China's "journey" has repeatedly demonstrated that all roads lead to modernization and that globalization is no Westernization. As the old saying goes, the feet know where the shoes bite, i.e. every country should determine its own development path based on history, reality and the experiences of civilizations.

Martin Jacques, a professor at Cambridge University, noticed a need for Western countries to learn more, saying China, with its new perception of socialism, has offered the world "a new example" and "a new possibility."

The past four decades of China's reform and opening-up have seen common development and progress in its in-depth interactions with the world. The process also testifies to China's confidence and capability to promote global growth and to contribute to a better tomorrow for mankind.