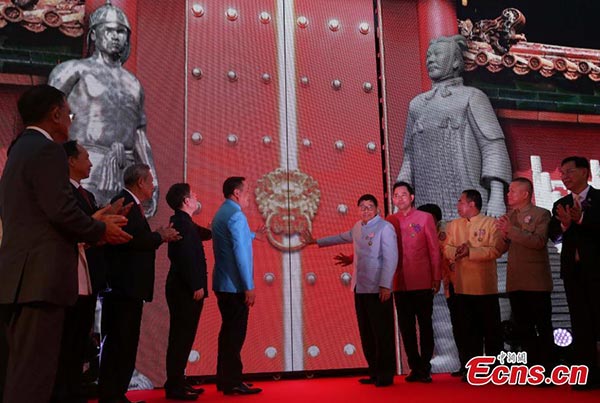 China's renowned Terracotta Warriors have been brought to Thailand for the first time for an three-month exhibition at National Museum Bangkok that started from Sunday. (Photo: China News Service)

BANGKOK -- More than 1,000 visitors flocked to see the exhibition of China's Terracotta Warriors at the national museum in Bangkok in only three hours after it was opened to the public in Thailand on Monday.

Thai Cultural Minister Ittipol Khunpluem said that before the exhibition opened its door at 9:00 a.m. local time, visitors have already lined up at the ticket booth.

"It was the perfect decision to showcase the Chinese Terracotta Warriors, as they represent heroism and patriotism," said Ittipol, adding "this first exhibition of iconic ancient Terracotta Warriors also deepens cultural and economic cooperation between China and Thailand."

The Terracotta Warriors on exhibition are part of the estimated 8,000 life-size sculptures of warriors, chariots, and horses, made in around 250 B.C. for the tomb of China's first emperor Qin Shihuang.

Chinese farmers first stumbled upon the tomb in Xi'an in the northern Chinese province of Shaanxi. An archaeologist identified fragments of terracotta found by the local farmers digging a well in 1974.

In 1987, the site was added to the list of World Heritage Sites by UNESCO.

The Thai culture minister said it is expected that 200,000 people will visit the exhibition during the three-month period until Dec. 15 this year.