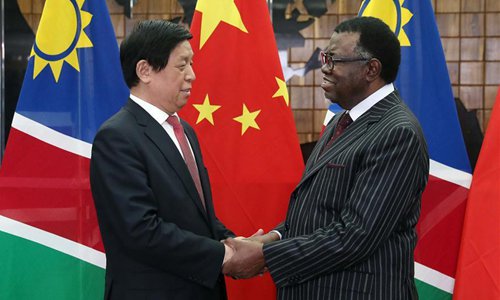 Li Zhanshu, chairman of the Standing Committee of the National People's Congress, shakes hands with Namibian President Hage Geingob in Windhoek, Namibia, May 16, 2018. Li paid an official friendly visit to Namibia on May 15 to 17 at the invitation of Speaker of the Namibian National Assembly Peter Katjavivi. (Photo: Xinhua)

China's top legislator Li Zhanshu paid an official friendly visit to Namibia on May 15 to 17 at the invitation of Speaker of the Namibian National Assembly Peter Katjavivi, calling for closer cooperation between the two countries.

In the capital city of Windhoek, Li, chairman of the Standing Committee of the National People's Congress (NPC), met with Namibian President Hage Geingob and former President Sam Nujoma, and held talks with Katjavivi and Chair of the Namibian National Council Magreth Mensah-Williams, respectively.

During the meeting with President Geingob, Li conveyed Chinese President Xi Jinping's sincere greetings and briefed on China's historic achievements since the 18th National Congress of the Communist Party of China (CPC) as well as the formation, content and significance of Xi Jinping Thought on Socialism with Chinese Characteristics for a New Era.

Reviewing Geingob's visit to China in March, Li said it has opened a new era for China-Namibia relationship that the two heads of state decided to elevate the bilateral ties to a comprehensive strategic partnership of cooperation.

Li voiced China's hope that the two sides will work together to step up communication on policy and alignment of development plans within the frameworks of the Belt and Road Initiative and the Forum on China-Africa Cooperation (FOCAC), and boost cooperation on infrastructure construction and industrial capacity to better benefit the people of the two countries.

The top legislator said the Chinese side appreciates Namibia's push to safeguard the unity of Africa and stands ready to enhance communication and coordination with Namibia in international and regional affairs.

Li expounded China's principles and stance on some of today's hot-spot issues in the world, and introduced in detail, as requested, President Xi's efforts to alleviate the tensions on and to help realize denuclearization of the Korean Peninsular.

Referring to the vision of a community with a shared future for humanity, Li said all the countries in the world are inter-dependent against the backdrop of globalization, and that they should treat each other equally and work together to safeguard peace and development, and address various challenges that all human beings are faced with.

China is willing to work with Namibia to continuously release new vigor of the friendship forged by the elder generation of leaders of the two countries, and the Chinese side will support and assist Namibia and other African countries in their push for developing economy and improving people's livelihood along a path suitable for their own national conditions, with a view to realizing the rise of Africa, a development miracle in history, according to Li.

President Geingob said Namibia and China not only enjoy deep traditional friendship, but also treat each other equally as partners.

The Namibian people are very clear that China is a true friend and good partner, Geingob said, noting that the Namibian side looks forward to maintaining close high-level interactions and boosting practical cooperation on trade and investment, infrastructure construction and exploitation of energy resources to ensure the road of comprehensive strategic partnership of cooperation will get broader and broader.

When meeting with Nujoma, Li extended President Xi's greetings to the founding father of Namibia. The top legislator spoke highly of Nujoma's consistent commitment to Namibia-China friendship as a senior statesman in Africa.

Recalling his friendly interactions with Chinese leaders, Nujoma said the brotherly friendship has remained unshakable and become even firmer as time goes by.

During the talks with Speaker Katjavivi and Chairperson Mensah-Williams, Li briefed them on the people's congress system in China.

Li said the system, combining upholding the CPC's leadership, ensuring that the people are the master of the country and ruling the country by law, fits well China's national conditions.

He advocated cooperation between the legislatures of the two countries should be first and foremost focused on implementing the important consensus reached by the heads of state, creating favorable legal environments for practical cooperation including trade and investment, increasing experience sharing on governance, and advancing sub-national cooperation and people-to-people exchanges, especially those among the youth and women between the two countries to lay a solid social foundation for the bilateral friendship.

Speaker Katjavivi and Chairperson Mensah-Williams expressed gratitude for China's precious support for Namibia's independence. They told Li that the Namibian side is willing to further enhance friendly interactions with the NPC at various levels in line with the memorandum of understanding inked between the two countries' legislatures to help advance the bilateral relationship.

During his stay in Windhoek, Li visited the local patients that have undergone cataract surgeries in Brightness Journey campaigns, as well as the Chinese and Namibian medical workers.

He said the removal of medical gauze pieces from the patients' eyes embodies the deeply-rooted friendship between the two nations and epitomizes China's medical assistance to Africa.

The top legislator encouraged the Chinese medical team to work and contribute to make the local people benefit substantially from medical cooperation between the two countries.

Li also witnessed the delivery of aid materials on wildlife protection to the Namibian side and visited the control and command center of Telecom Namibia.

Namibia was the last stop of Li's three-nation trip to Africa. The top Chinese legislator previously visited Ethiopia and Mozambique.