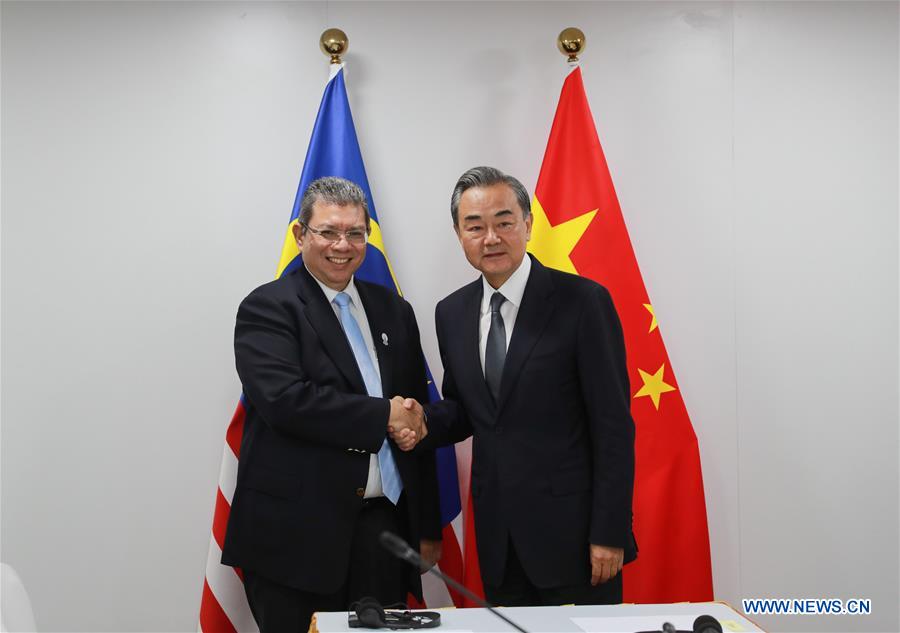 Meeting with Malaysian Foreign Minister Saifuddin Abdullah, Wang hailed the sound momentum of China-Malaysia relations, saying that this year marks the 45th anniversary of the establishment of the diplomatic ties between the two countries.

China stands ready to work with Malaysia to implement the important consensus reached by the leaders of the two countries, consolidate strategic mutual trust and further promote mutually beneficial cooperation, he said.

Noting that the China-proposed Belt and Road Initiative upholds the principles of extensive consultation, joint contribution and shared benefits; adopts open, green and clean approaches and promotes high-standard, livelihood-improving and sustainable development, Wang said the initiative focuses on interconnectivity and is highly matched with the development strategies of Malaysia and the Association of Southeast Asian Nations.

The Chinese state councilor called on the two sides to step up the development of the joint industrial park in each other's country and boost industrial and innovative cooperation, saying that China welcomes the relaunch of the East Coast Rail Link project.

China and Malaysia should enhance coordination and cooperation in multilateral affairs and resolutely supports multilateralism and free trade.

Saifuddin, for his part, said that Malaysian Prime Minister Mahathir Mohamad have made two visits to China in half a year since assuming office, which fully showed the importance the country attaches to the relations with China.

Malaysia-China relations enjoy a long history and transcends trade and business ties, he said, noting that Malaysia is willing to actively participate in the Belt and Road development.

When meeting with Mongolian Foreign Minister Damdin Tsogtbaatar, Wang said this year marks the 70th anniversary of the establishment of diplomatic ties between the two countries, calling on the two sides to take this opportunity to further synergize the Belt and Road Initiative and Mongolia's Steppe Road program in a bid to achieve substantive results at an early date. 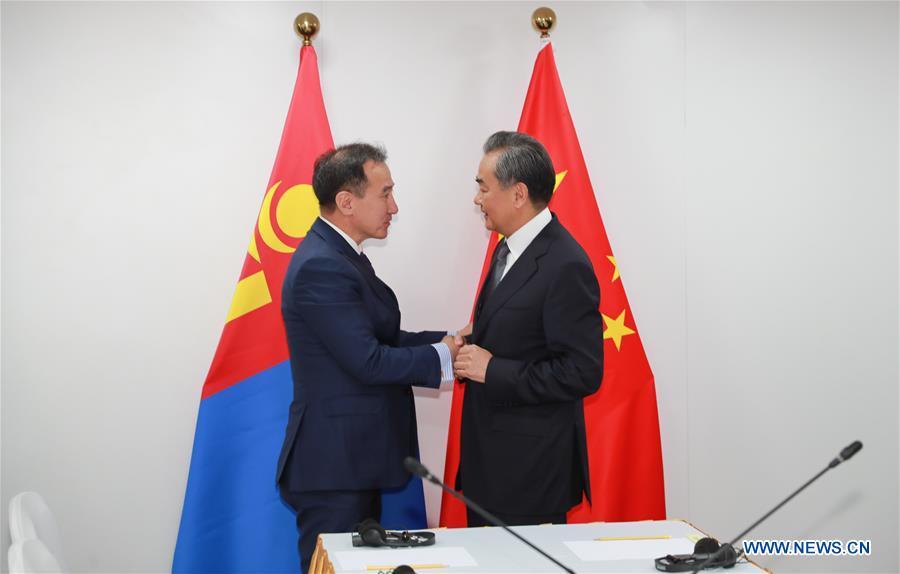 Hailing the initiative a symbol of multilateralism, Tsogtbaatar said Mongolia is ready to spare no effort to support and participate in the initiative which is conducive to promoting sustainable growth in the region.

The two sides vowed to consolidate mutual political trust and strengthen pragmatic cooperation so as to bring the bilateral relations to a new high.

In his meeting with Timor-Leste's Foreign Minister Dionisio da Costa Babo Soares, Wang said China and Timor-Leste are good partners. In recent years the two countries have actively carried out cooperation on jointly building the Belt and Road, with a number of projects built by Chinese companies benefitting the people's livelihood in Timor-Leste and welcomed by the locals. 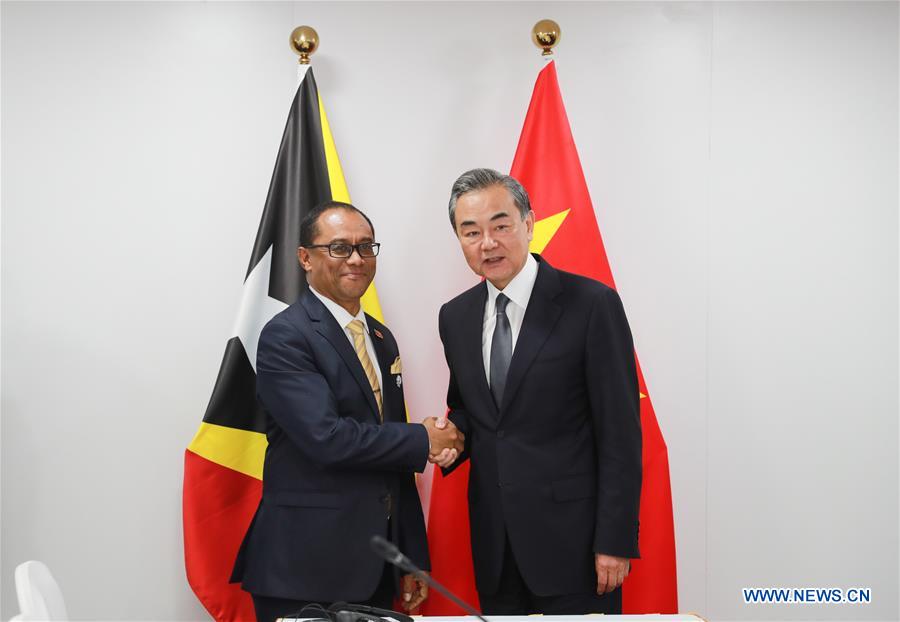 Wang said China is ready to draw up cooperation plans with the Timor-Leste side on Belt and Road cooperation at an early date and expand cooperation in such areas as petrochemical industry, trade as well as framing and fishing sectors.

He said Timor-Leste sees China as a trustworthy friend, and is grateful to the assistance China has provided for the country's economic development. Timor-Leste is willing to actively participate in Belt and Road cooperation, enhance inter-connectivity, and work with the Chinese side toward greater development of the bilateral comprehensive cooperative partnership.

In his meeting with Canadian Foreign Minister Chrystia Freeland, Wang said it is regrettable that Canada arbitrarily detained a Chinese citizen in December last year, which aroused strong indignation of the Chinese people and brought serious difficulties to the China-canada relations. 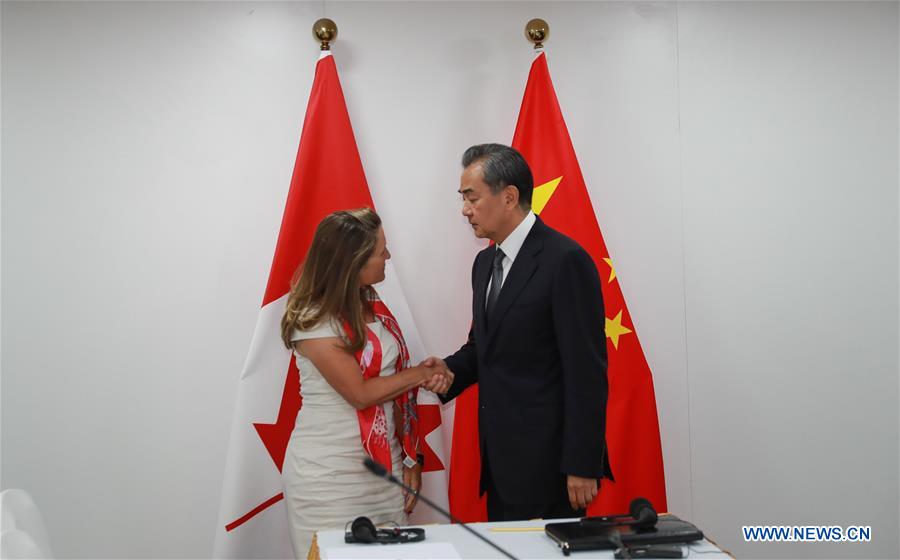 The Chinese government firmly upholds the legitimate rights and interests of Chinese citizens and enterprises. "We hope that this issue will be properly resolved as soon as possible so as to bring the China-Canadian relations back to the right and healthy track at an early date," he said.

For her part, Freeland said there was no historical grudge between both countries. It is indeed heartbreaking that China-Canada relations are what they are today.

Next year marks the 50th anniversary of the establishment of diplomatic ties between the two countries. Canada values the relations with China and is willing to work with China for healthy and stable development of bilateral relations, she said.

While meeting with Australian Foreign Minister Marise Payne, Wang hoped that Australia will meet China halfway, uphold the principles of mutual respect and treating each other equally, properly handle differences, promote consensus and trust so as to push the China-Australia relations back to the right track. 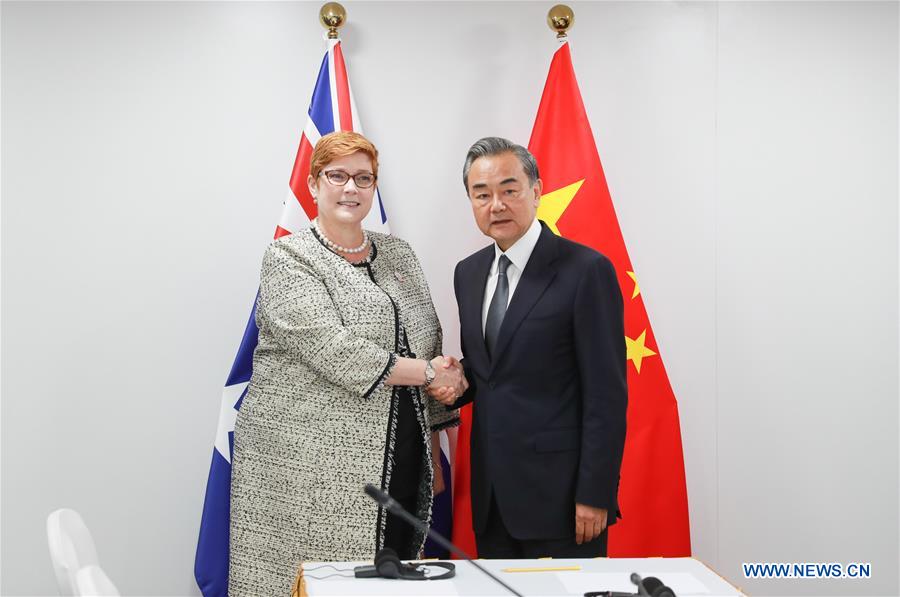 Welcoming Australia to share the opportunities brought by China's reform and opening up, the Chinese state councilor also hoped that Australia sticks to openness and inclusiveness to create a fair, transparent and indiscriminative business environment for Chinese enterprises.

Payne said the Australian side values and recognizes China's growth and its development potential and speaks highly of China's significant achievements in poverty reduction and development.

Although there are some differences in the bilateral ties, Australia is ready to join hands with China to promote dialogue and communication, seek more consensus, expand cooperation on trade and investment and push forward healthy development of bilateral ties on the basis of mutual respect, the Australian foreign minister said.

On the issue of 5G, Australia will make its decision independently and adopt no policies discriminating specific countries or enterprises, Payne said.