BRI NEWS China should be alert amid US provocations

China should be alert amid US provocations 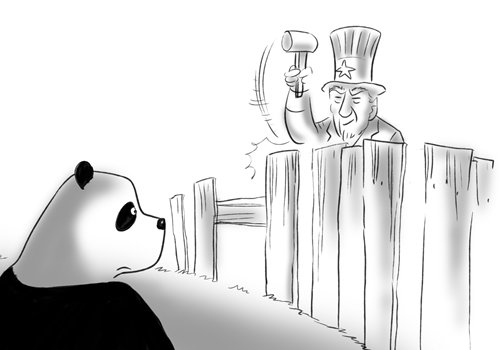 Ties between Beijing and Washington have taken a dramatic turn since the end of last year. In December 2017 and early this year, the US released several reports including a missile defense review and clearly defined China as a "rival."
Apart from withdrawing its invitation to China to the 2018 Rim of the Pacific Exercise, the US has become more aggressive in its Freedom of Navigation operations. By the end of May, US Navy vessels entered the waters around the Xisha Islands in the South China Sea and conducted mobile exercises, provoking China's sovereignty and security.
Hence, it can be seen that Washington's overall China strategy is changing. Since the US and China established diplomatic ties in 1979, the fundamental framework has not changed but the emphasis has shifted. The US has stepped up efforts to keep China in check; the years when Washington took its economic relations with Beijing as the cornerstone of bilateral ties are gone. China is yearning for a healthy relationship while the US is resorting to provocations. Coupled with Trump's caprice, it's difficult to say where China-US ties are headed.
Trump has failed to clarify his Indo-Pacific strategy while claiming that his predecessor Barack Obama's "Pivot to Asia" is out of date. The US has also forged a four-nation alliance with Japan, India and Australia, known as Quad, to check a rising China. But neither the Indo-Pacific strategy nor the Quad can go far, as China is rising largely due to its economic power. It has strong economic ties with the US and nations in its periphery are heavily reliant on it economically.
In the future, China will further promote the Belt and Road initiative and encourage participation of more countries to boost regional integration. China will develop partnerships instead of alliances. But it must be ready for any military provocations from the US to safeguard its sovereignty.
Besides the vicissitudes in Sino-US ties, the situation on the Korean Peninsula has seen a stunning turnaround over the past few months. Before 2018, Washington had been imposing extreme military and economic pressure on Pyongyang, which then turned to retaliate with fierce nuclear and missile tests. One of the world's most dangerous places had been caught up in a vicious cycle.
But the cycle seems to have changed within a short span of time. If the Singapore summit goes on smoothly, the North may abandon its nuclear program and the US will provide assistance. Nonetheless, we cannot prevent the worst-case scenario from happening: an escalation in confrontation. Given a wayward Trump, the latter is possible. Moreover, since the US has been focused on how to deal with North Korean nuclear crisis, the possibility of a war cannot be completely ruled out. China needs to get prepared for whatever happens.
What this year's Shangri-La Dialogue differs from the past is the highlight of India, as shown by the large Indian delegation, the topic of Indo-Pacific strategy and keynote address of Indian Prime Minister Narendra Modi. This emphasis has relation to the US' strategic consideration.
Ding Hao, director of Institute of Foreign Military Studies at the PLA Academy of Military Sciences
The US' global leadership is diminishing because of a fickle president. Trump seems to be ready to break a promise any time. He even started slapping tariffs on longtime allies. Now, Southeast Asian nations think it quite risky to side with the US. With the "America First" policy, the biggest power in the world may well lose most of its partners.
Spotting the risks in getting involved in the US game, Indian Prime Minister Narendra Modi stated that the Indo-Pacific region is united and open and that no zero-sum game should be staged. He also hailed cooperation with China, indicating that the future of Asia lies in the common development of China and India.
Washington's strategic proposition constituted the major reason for India to adjust its foreign policy. During Modi's speech, he attached great importance to India-Russia relations, despite escalating tensions between Washington and Moscow. In addition, India has also developed a benign relationship with Iran.
As far as the South China Sea issue is concerned, it's the external powers that have given rise to militarization of the water body. The South China Sea dispute is an issue between China and various claimants. Over the years, the parties engaged in negotiations and coordination, rendering a rather stable scenario in the region.
They are now working on a South China Sea code of conduct.
This year's Shangri-La Dialogue doesn't differ much from previous ones. The Chinese delegation attended the dialogue with an aim to communicate with others and safeguard national interest. We met some challenges on the scene, but generally the dialogue was carried out in a friendly atmosphere.