COLOMBO, March 14 (Xinhua) -- "The sediment barriers are just like the Great Wall on the water. This is truly of great wisdom," a Sri Lankan engineer exclaimed after seeing the sediment barriers built around the Colombo Port City to stop the flying sand enter into the city when the Port City's land reclamation was going on. 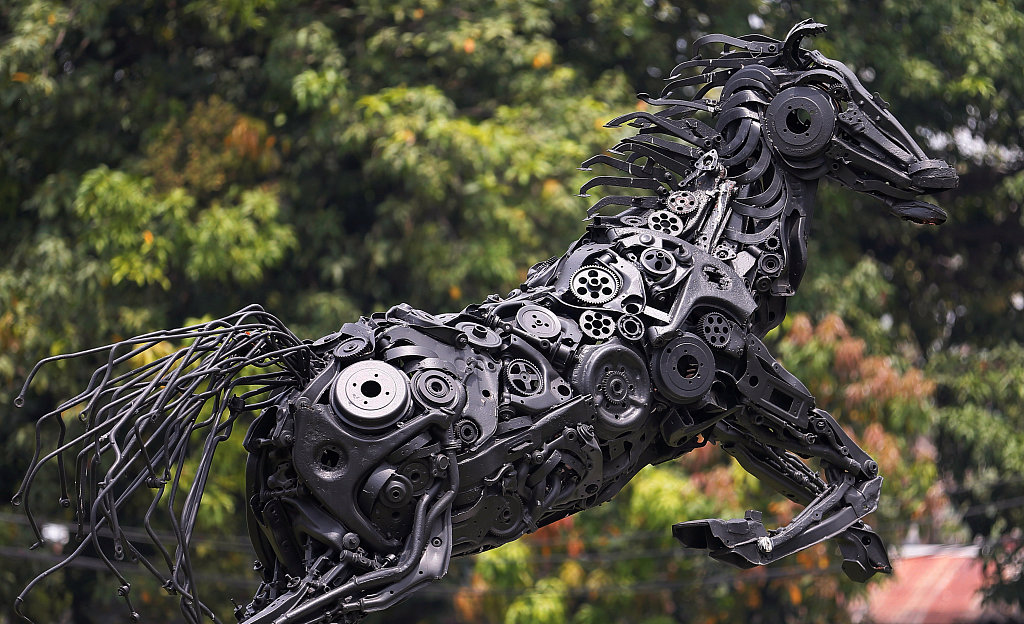 A horse statue made with motor spare parts is seen in the middle of Panchikawatta in Colombo, Sri Lanka March 13, 2019. (Photos: VCG)

China and Sri Lanka are working closely together under the China-proposed Belt and Road Initiative, and the fruits of its cooperation have indeed brought tangible benefits for both sides.

Sri Lanka, renowned for its unique natural landscape, has always attached great importance to protecting the nature, and has launched a series of strict environmental protection regulations, which consequently requires the Belt and Road projects in the island not only to be profit oriented, but more importantly, to be environment oriented.

Over the years, all the successful projects, such as the Colombo Port City and the Colombo International Container Terminal, have proven that when China-Sri Lanka cooperation under the Belt and Road Initiative injects new impetus to the economic development of the island country, it has also effectively protected the blue skies.

Spread over reclaimed land from the sea adjacent to the current commercial district of Colombo, the Colombo Port City, co-developed by the Sri Lankan government and China's CHEC Port City Colombo (Pvt) Ltd, a subsidiary of the China Communications Construction Company Limited (CCCC), will in future become a commercial, financial, residential and international entertainment hub in the Indian Ocean.

The 269-hectare land reclamation of the Colombo Port City was completed early this year, with Sri Lankan Minister of Megapolis and Western Development, Patali Champika Ranawaka saying it was a "technological marvel" and "one of the most spectacular development projects Sri Lanka had ever seen."

However, for the Chinese constructors participating in the project, they would rather describe it as a green technological marvel.

Zhou Zhongpan, captain of Xin Hai Long, a trailing suction hopper dredger which was once in the construction fleet, told Xinhua that environmental protection rules had been strictly complied with during the sand mining operation.

The dredging area, or excavation area, was around 7 km from the coastline to minimize the impact on the ecosystem, particularly coastal erosion and marine creatures, he explained.

For the pumping area, sediment barriers were also introduced to protect the local environment before a breakwater was built.

Noorul Aleem, health, safety and environment (HSE) supervisor of the Port City project, said local residents were initially concerned about the possible impact of the mega-project on their communities.

But government authorities worked strenuously to verify and ensure that all environmental requirements, such as air quality, noise, vibration and water quality, were properly met by the contractors.

According to Ranawaka, 26 government agencies and environmental monitoring teams were appointed by the Department of Coast Conservation and Coastal Resource Management to oversee the environmental compliance of the Port City project.

"Now local residents are convinced that the Port City will fully benefit the country's economy without harming the environment," Aleem said.

Just miles north of the construction site of the Colombo Port City, lies the Colombo International Container Terminals (CICT), which is one of the three terminals in the Colombo Port and also another mega cooperation project between China and Sri Lanka under the Belt and Road Initiative.

The Silk Road Economic Belt and the 21st Century Maritime Silk Road Initiative, proposed by China in 2013, aims to build a trade and infrastructure network connecting Asia with Europe and Africa along the ancient trade routes of the Silk Road.

In 2014, China's CM Port and Sri Lanka Ports Authority successfully embarked on unveiling CICT. Driven by CICT, the Colombo Port, which set a new record by handling 7 million Twenty-foot Equivalent Units (TEUs) last year, has become one of the fastest growing ports in the global market.

According to international rating agency Alphaliner, the Colombo Port is ranked the world's No. 1 port with the highest container growth in the first half of 2018.

In recent years, the Colombo Port has gained remarkable achievement in business growth. Moreover, CICT has also made its contribution in the area of environmental protection.

In the container yard of CICT, there are 40 rubber-tired gantry cranes (RTG) which are loading and unloading containers every day in a busy and orderly manner.

However, unlike traditional container yards, the container yard has made no loud noises or a pungent odor from the diesel generators.

CICT, in 2017, converted all of its traditional RTGs to ERTGs (Electrified Rubber Tired Gantry crane) by upgrading the RTG to an electric system in order to modify the RTG driving power from the built-in diesel-generator, making it the first of its kind in Sri Lanka and the largest green terminals in South Asia.

Ekanayaka, one of the RTG operators in CICT, told Xinhua, "the black smoke from the diesel engine has disappeared, the noise has gone, and the failure rate of the RTG also has been substantially reduced."

Zou Hui, head of the engineering department of CICT, said, "The ERTG project proves that our company is committed to reducing greenhouse gas emissions. We hope to not only bring investments into Sri Lanka but also bring in advanced technology and environmental protection concepts."

Chairman of Sri Lanka Ports Authority Parakrama Dissanayake described the upgrading in CICT as a project which "will benefit Sri Lanka and the entire maritime sector."

Cover image: A restaurant made out of container named Ayubowan, which means "welcome" in Sinhala is seen near Galle Face Green in Colombo, Sri Lanka March 13, 2019.