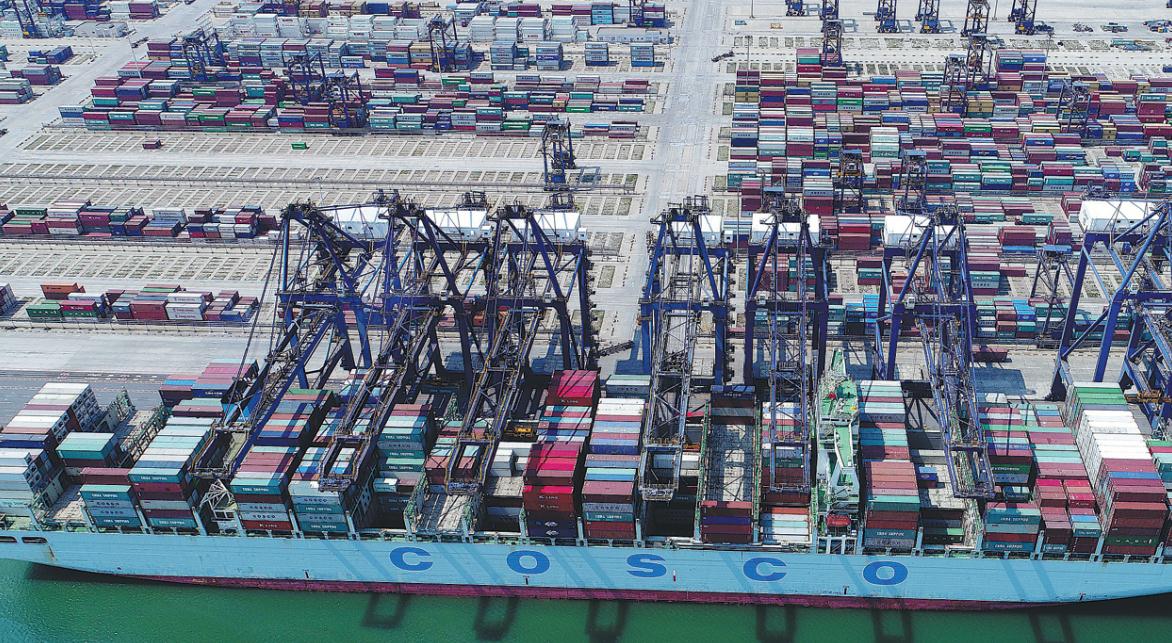 A view of the Dalian Port in Liaoning province. (Photo: Xinhua)

Just five minutes away by cargo train from one of Dalian Port's container terminals in Northeast China's Liaoning province, crane operators are busy unloading containers shipped from Japan and South Korea, and transferring them to a freight train that will depart for Moscow in two days.

With trade links to more than 300 ports in over 160 countries and regions, Liaoning Port Group and its partner Russian Railways are currently investing and building a logistics center outside Moscow, which is expected to be operational by the end of 2020.

With the business starting in January, the establishment of Liaoning Port Group is a typical example of the country's intensified efforts to integrate the nation's ports and diversify their business development model to enhance their earning ability via measures such as sea-rail transport, intelligent port development and further expanding connectivity with markets related to the Belt and Road Initiative.

As shipping is a lifeline of global trade and ports play a key role in regional development, the government is expected to release the guideline for building world-class ports across the country to support China's foreign trade and service businesses this year, according to a report by Beijing-based Economic Information Daily.

Among them, the integration of regional ports has become one of the notable trends, as the recent pace of port reorganization and integration in Tianjin municipality, and Shandong and Jiangxi provinces has either implemented or accelerated, indicating more port conglomerates may emerge sooner or later.

Because China currently is in the process of building a modern economic system and pushing its industries to move toward the quality development stage of the global value chain, well-connected and efficient container ports enabled by busy shipping activities are critical in cutting trade costs and facilitating sustainable development, said Lu Chengyun, an assistant researcher at the Institute of Transportation Research at the National Development and Reform Commission.

As an infrastructure industry, Lu said the development level of a port needs to adapt to economic and industrial development in different stages, as well as consider measurement indicators including throughput capacity, economic contribution rate, business environment and green development.

In addition to enlarging their shipping service categories in more areas such as crude oil, coal, iron ore and vehicle transportation, the group will enhance connections with more "waterless ports" in inland provinces participating in the BRI development, and provide services for hinterland areas involved in the Eurasian Continental Bridge via international freight train services and other multimodal transportation methods.

Shandong Port Group has set goals to have its cargo throughput exceed 1.65 billion metric tons by 2022, including more than 800 million tons of goods for foreign trade, as well as a large amount of volume generated by 28 million TEUs (twenty-foot equivalent units).

To ensure smooth development, Li Jin, chief researcher at the China Enterprise Research Institute in Beijing, suggested that China's ongoing port integration should be market-oriented, and adapt to the development logic of intercity economic cooperation and regional economic integration. The government should tighten its supervision and avoid negative factors such as unfair competition and low efficiency caused by integration.

Dong Liwan, a shipping professor at Shanghai Maritime University, said: "It is necessary to introduce wider mixed-ownership reform in those planned port operating groups, as it can optimize asset structure and boost their service capability in particular in areas such as e-commerce, cold-chain storage and ship maintenance services."

All those moves will help domestic ports to further compete with established rivals such as those in Singapore and Busan in South Korea, he said, noting that the successful reorganization and expansion of Ningbo Port and Zhoushan Port in 2015 has brought more practical operational measures, references, inspiration and confidence to other domestic players, as well as provincial governments.

Ningbo-Zhoushan Port, one of China's busiest ports, saw its cargo throughput jump 5.5 percent year-on-year to 557.96 million tons in the first half of 2019. Its container throughput ranked second in the country only after Shanghai Port, data from the Ministry of Transport show.

As many economies are seeking new ways to minimize the impact caused by unilateralism and protectionism, Ningbo-Zhoushan Port Group, the operator of the port, said it has been accelerating smart port construction to improve efficiency in its 19 port areas such as Beilun Port and Yangshan Port, and tapping the inland markets to seek new growth momentum so far this year.

The port has also embraced the BRI by optimizing shipping routes to related regions. The economies related to the BRI contributed to more than 40 percent of its container throughput during the January-June period, with the container throughput from Southeast Asia and the Mediterranean routes in the first half surging 41 percent and 15.8 percent year-on-year respectively.

It is not only in coastal provinces, East China's Jiangxi province is also drafting a resource integration plan for its ports including Jiujiang Port, Nanchang Port and Shangrao Port to better participate in the development of the Yangtze River Economic Belt.

A provincial-level port management group, similar to those in Liaoning and Shandong, is scheduled to complete all the industrial and commercial registration to develop inland waterways before October this year, according to information released by Jiangxi Provincial Port and Waterway Construction Investment Group.

In the meantime, many local governments are also studying how to allow large cargo vessels to reach the Yangtze River's upper reaches after many water channels have been expanded over the past three years, said Yi Jiyong, deputy head of the Water Transport Bureau under the Ministry of Transport.