China to advance ties with Brazil to new level: FM 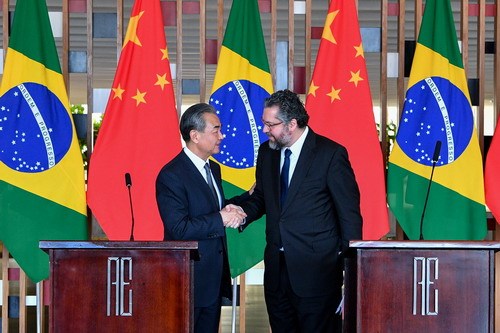 Wang made the remarks when meeting journalists after holding the third China-Brazil Foreign Ministers' Comprehensive Strategic Dialogue with his Brazilian counterpart Ernesto Araujo.

China-Brazil relations are of strategic guidance, Wang said. Regardless of the changes in the international landscape and the respective situations of the two countries, China will continue to value Brazil's important role in international and regional affairs and to support Brazil's domestic development.

The meeting is therefore of positive significance for enhancing mutual understanding and trust as well as strengthening bilateral exchanges and cooperation, Wang added.

The two sides believed that head-of-state diplomacy plays a leading, strategic role in maintaining the healthy and stable development of bilateral ties. China welcomes Brazilian President Jair Bolsonaro's state visit in October and later Chinese President Xi Jinping will also attend the meeting of the leaders of the BRICS (Brazil, Russia, India, China and South Africa) at the invitation of Brazil.

The two sides also agreed to promote bilateral practical cooperation and implement the results of the fifth meeting of the China-Brazil High-Level Coordination and Cooperation Committee.

As two important emerging forces in the process of global multi-polarization, China and Brazil should take advantage of the bilateral mechanism, strengthen the integration of China's Belt and Road Initiative with Brazil's development plan, deepen cooperation in the traditional areas of agriculture, mining, infrastructure, aviation and aerospace as well as expand new cooperation areas such as technological innovation and digital economy, Wang added.

Both sides agreed to celebrate the 45th anniversary of the establishment of their diplomatic ties and strengthen collaboration under multilateral frameworks of the United Nations, Group of 20 and BRICS, so as to address global challenges and to play a positive role in safeguarding world peace and stability and promoting global growth.

The foreign minister said China fully supports Brazil in holding the eleventh meeting of the leaders of the BRICS in November to jointly convey positive signs of solidarity and cooperation between the BRICS countries and to contribute to the vision of the second "golden decade" of BRICS cooperation.

Wang is on a two-nation tour to Latin America, which will also take him to Chile from Friday to Sunday.