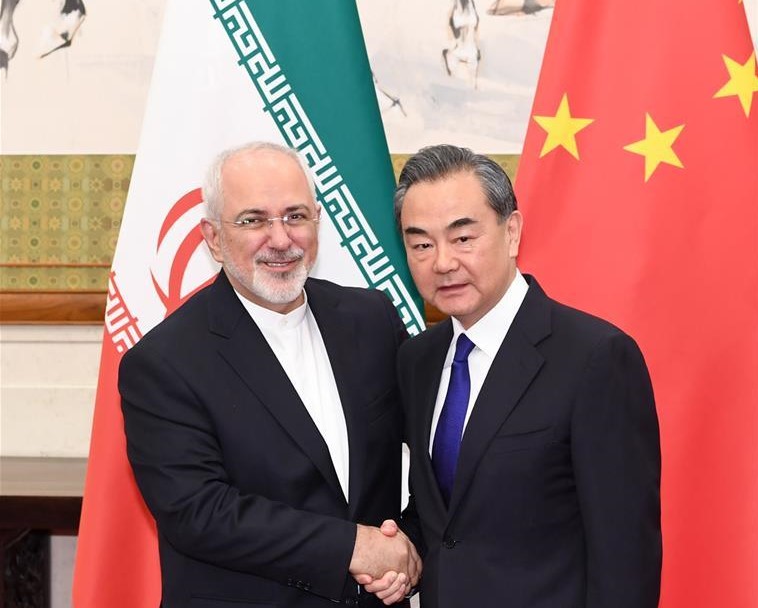 China firmly upholds multilateralism and is committed to maintaining international agreements, China's State Councilor and Foreign Minister Wang Yi said in his meeting with Iranian Foreign Minister Mohammad Javad Zarif who arrived in Beijing on Sunday for a working visit.
Wang noted that the accord on the Iranian nuclear issue is a hard-earned result of multilateralism, which has helped maintain the international non-proliferation system as well as  peace and stability in the Middle East, China Central Television (CCTV) reported.
"Zarif will visit China, Russia and some European countries, during which he will exchange views with relevant parties on the developments of the Iranian nuclear issue. China is one stop on his tour," said Chinese Foreign Ministry spokesperson Geng Shuang Saturday.
Iran attaches great importance to the development of friendship with China and is willing to cooperate with China on the Belt and Road initiative in areas such as connectivity and infrastructure construction, said Zarif.
Zarif's visit came after US President Donald Trump declared on Tuesday that he was withdrawing the US from the Iran nuclear deal.
The deal, formally known as the Joint Comprehensive Plan of Action (JCPOA), was signed by Iran, and the five permanent members of the UN Security Council: China, the US, Britain, France and Russia; Germany and the European Union in 2015.
"The US withdrawal from the Iranian nuclear accord was the most serious decision ever made by Trump since he became president. The move may lead to a nuclear arms race in the Middle East, which could badly undermine world peace," said Tao Wenzhao, a senior research fellow at the Chinese Academy of Social Sciences.
"The international reputation of the US has been significantly damaged by breaking the accord," he said.
The US' move may also affect the Korean Peninsula issue. Trump has shown his volatility by breaking the Iran nuclear deal that was endorsed by multiple countries and this may cast a shadow over his upcoming summit with North Korean leader Kim Jong-un, Li Weijian, a professor at the Shanghai Institutes for International Studies, told the Global Times on Sunday.
"The US' influence in the Middle East has decreased, and it is losing ability to handle issues in the area. As the US is considered unreliable by more countries, China is expected to play a more important role in Middle East affairs," Li said.
"China always insists on peaceful dialogue. China is providing help in the region out of a willingness to promote development, especially in countries that are less developed," Li said.
European countries are also expected to work more closely with China to keep the Iranian accord alive, said experts.