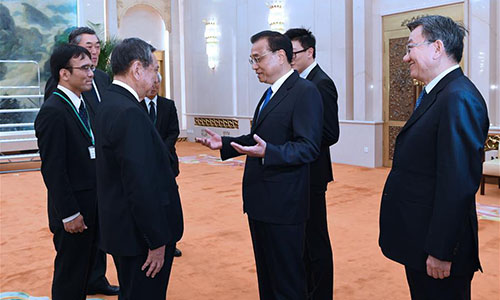 Chinese Premier Li Keqiang's official visits to Indonesia and Japan from May 6 to 11 are expected to inject fresh impetus into regional cooperation and reset China-Japan relations.The six-day trip will also rally support for free trade amid the rising tide of protectionism.During the Japan leg of the tour, the premier will attend the 7th China-Japan-South Korea leaders' meeting, which will reboot the high-level interaction among the three Asian nations after two-and-a-half-years' suspension.BACK ON NORMAL TRACKLi's visit to Japan will be the first in eight years by a Chinese premier, coinciding with the 40th anniversary this year of the signing of the treaty of peace and friendship between the two countries.In a telephone conversation with Japanese Prime Minister Shinzo Abe on Friday, Chinese President Xi Jinping lauded the recent positive messages and actions from Tokyo concerning the development of bilateral ties.He called for joint efforts with Japan to bring the ties back on normal track and make sure that they consistently advance in the right direction.Li will meet with Japanese Emperor Akihito and hold talks with Abe. He is expected to reach consensus with the Japanese side on building mutual trust, promoting pragmatic cooperation and properly handling differences, Chinese Vice Foreign Minister Kong Xuanyou said Friday.While pressing the reset button, the Chinese premier is also expected to urge Tokyo to re-honor the spirit of the treaty of peace and friendship and match words with deeds.This year also marks the 40th anniversary of China's reform and opening up. Since Beijing began to embrace the outside world in 1978, the economies of China and Japan have been closely intertwined.In spite of cooling ties, bilateral trade jumped to some 300 billion U.S. dollars in 2017, up over 10 percent year on year. Last year, the number of tourists going to Japan from the Chinese mainland touched 7.3 million, an annual rise of 15 percent. Japanese investment in China has also reached an unprecedented level.In his keynote speech at this year's Boao Forum for Asia annual conference, Xi voiced China's determination for further reform and opening up, and announced some concrete measures, including lower tariffs for automobiles and fewer restrictions on foreign ownership in the auto industry.Li is scheduled to travel to Japan's northern island of Hokkaido, where he will tour a high-tech exhibition at a local Toyota factory.Li's visit takes place at a time when China is set to open up wider, faster and in a more determined manner, Chen Zilei, director of the Research Center for Japanese Economics at Shanghai University of International Business and Economics, said.This signifies that the development of bilateral relations is at a turning point, Chen said, anticipating further improvement of ties and deepened cooperation, especially in trade and economy.BOOST TO FREE TRADELi's visit is also expected to showcase the region's adherence to free trade at a time when U.S. President Donald Trump's unilateral tariffs are creating an international trade discord and alienating even Washington's own allies.Li, Abe and South Korean President Moon Jae-in, during their meeting in Tokyo, are expected to make substantial headway in the six-year-old trilateral free trade agreement (FTA) talks.The recent positive developments in Northeast Asia have created a more solid foundation for the talks. The possibility of achieving tangible outcomes on a comprehensive and mutually beneficial FTA, which can be a powerful bulwark against protectionism, has increased, analysts say."The importance of the three sides returning to the negotiation table at the current phase cannot be overemphasized," Jiang Yuechun, director of the Department for World Economy and Development Studies at China Institute of International Studies (CIIS), said.China, Japan and South Korea are the world's second, third and 11th largest economies respectively. If an FTA is signed, the giant common market in Northeast Asia will be a strong driver of regional economic integration, trade and investment growth, and can eventually breathe new life into the world economy, Jiang said.In Jakarta, Li will also push for free trade and regional integration with Indonesia and the broader Association of Southeast Asian Nations (ASEAN).China and the ASEAN have been benefiting from their strategic partnership for 15 years, with their trade volume exceeding 500 billion U.S. dollars last year.China-ASEAN cooperation should be carried out at multiple levels, through all kinds of channels and at different speeds, Song Junying, deputy director of the Department for Asia-Pacific Security and Cooperation Studies at CIIS, said.NEW IMPETUS TO BELT AND ROADJakarta is where the Chinese president first proposed the 21st Century Maritime Silk Road five years ago. The plan, part of the Belt and Road Initiative, synergizes with Indonesia's Global Maritime Fulcrum strategy, which seeks to ensure Jakarta's maritime interests.Indonesians will soon be able to travel on the Jakarta-Bandung high-speed railway, which is under construction with China's help.In Jakarta, Li will meet with Indonesian President Joko Widodo, and witness the signing of multiple deals on alignment of their development strategies, e-commerce and agricultural cooperation among others, Chinese Ambassador to Indonesia Xiao Qian said in a signed article.Japan has been voicing its openness to the Belt and Road Initiative since May 2017.Abe said early this year that Tokyo would "properly respond to" individual cooperation programs related to the initiative that aims at achieving common development. Under the initiative, third-party market cooperation will be a focal point in China-Japan collaboration, analysts say.Feasible areas of collaboration include infrastructure construction, high-speed railway, artificial intelligence and energy exploitation, CIIS's Jiang said.The Japanese media said Tokyo plans to work with Beijing on the initiative by financially supporting private-sector partnerships. The cooperation will center on areas like the environment, industrial modernization and logistics."With the government's attitude turning supportive, Japanese enterprises can start to find more direct ways of participation," Jiang said.Kiyoyuki Seguchi, research director of the Canon Institute for Global Studies in Tokyo, also said that economic interactions with China will expand business opportunities for Japanese companies."If projects with good content are effectively implemented, they can be expected to promote the globalization of many Japanese companies whose response to globalization is delayed," Seguchi added.