China to step up SCO investment

China is poised to increase investment in fellow Shanghai Cooperation Organisation (SCO) member states, offering billions of dollars in special loans that will boost infrastructure and industrial development in these countries, experts said, while also increasing economic and trade cooperation within the traditionally security-focused bloc. 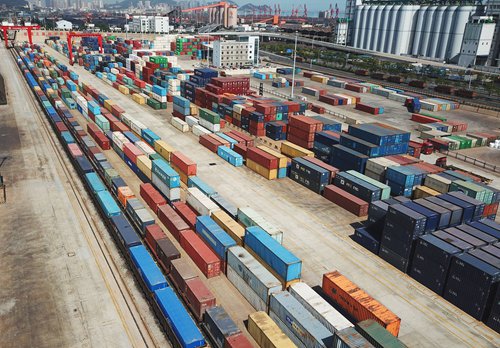 An aerial view of containers on a quay at the China-Kazakhstan logistics terminal in Lianyungang, East China's Jiangsu Province (Photo: IC)

During a speech at the SCO summit in Qingdao, East China's Shandong Province, on Sunday, Chinese President Xi Jinping pledged to set up a 30 billion yuan ($4.69 billion) special lending facility within the framework of the SCO Interbank Consortium, according to the Xinhua News Agency.

Xi said that the special loan was announced in connection with his proposal for the SCO to build a "powerful engine to achieve common development and prosperity," Xinhua reported.

The move is in line with China's push for wider regional economic and trade cooperation under the Belt and Road initiative and will provide much-needed funding to spearhead infrastructure and industrial projects in SCO member states, experts noted.

"There is massive demand for investment in infrastructure and industrial development within the SCO, especially after India and Pakistan joined the group," said Liu Ying, a research fellow with the Chongyang Institute for Financial Studies at Renmin University of China.

While SCO countries have long proposed linking their transportation networks to facilitate trade, implementation of the plan has stalled due to a lack of funding, according to Liu. "Building transport connections requires a huge amount of investment and these countries might not be able to fund it. China is better positioned to provide it," she told the Global Times on Monday.

Apart from infrastructure projects, the special loan could also be used in industrial development in the SCO member states, according to Liu. Specifically, energy projects and industrial parks could receive funding, she noted.

China has already been investing heavily in infrastructure and industrial development projects in some of the SCO member states through the Belt and Road initiative. China Development Bank, a policy bank, said that it has invested a total of more than $100 billion in SCO member states so far, according to a Xinhua report on Thursday.

By setting up the special loan under the SCO Interbank Consortium, China is trying to promote an expansion of free trade among SCO member states, said Chen Fengying, an expert at the China Institutes of Contemporary International Relations.

"The main purpose is trade facilitation because this is very important for the region," Chen told the Global Times on Monday, noting that while the bloc has previously focused mainly on security cooperation, trade has become an increasingly critical issue in today's world of rising trade disputes and protectionism.

"Trade facilitation is just the initial goal. The ultimate goal is for us to move toward a free trade pact," Chen said. "That's the right path for the SCO to become a prominent voice in global issues regarding both security and trade."

Liu also noted that the special loan comes at a time when major economies, such as the US and EU, are continuing to tighten monetary policy, drawing waves of capital flows back toward them and depriving other countries, including those in the SCO, of investment.

"There is an element of risk prevention in [setting up the special loan]… because as global money supply is in retreat, [the loan] could address liquidity issues for these countries," she said.