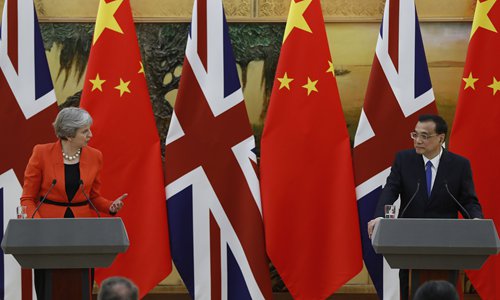 British Prime Minister Theresa May speaks during a joint press conference with Chinese Premier Li Keqiang at the Great Hall of the People in Beijing on Wednesday. May is on a state visit to China as she seeks to bolster her country's global trade links ahead of its departure from the European Union. Photo: AFP

China and the UK appear set to expand their already deep ties in education and culture as British Prime Minister Theresa May kicked off her tour of China with a visit to a university in Wuhan, Central China's Hubei Province on Wednesday. The prime minister arrived in Wuhan early Wednesday to start her three-day visit to China. She said that Britain is eyeing closer cooperation with China in education and culture, the Xinhua News Agency reported. She said the two countries had long cooperated in education and achieved results. She hoped the youth from the two countries will communicate more and cooperate further to build a better future.May is looking to extend or sign a number of deals in the education sector that could be worth more than $777 million and create 800 jobs in the UK, the BBC reported. The Prime Minister is likely to sign an agreement to extend a math teacher exchange program for two years and bring some 200 English teachers to China.Since April 2014, more than 500 teachers from China and the UK have participated in the math teacher exchange project which has benefited thousands of students, the Xinhua News Agency reported on Saturday. In 2016, the UK Department for Education announced that it would spend 41 million pounds ($53 million) on a four-year program to spread the Shanghai Teaching for Mastery Program in the country. The UK also imported a series of 36 books called "Real Shanghai Mathematics" for use by British students in 2017, according to Xinhua.May visited an education exhibition named "The Spirit of Youth" at Wuhan University where she learned about longheld connections between Wuhan University and Oxford University between 1945 and 1948. In the exhibition, she also enjoyed paintings by the university's primary school students that focus on Wuhan's sister city in Manchester, thepaper.cn reported.Wuhan has more than a million university students."May's visit to Wuhan University shows her focus on the voices of the younger generation," Li Guanjie, an assistant research fellow on British Studies at Shanghai International Studies University, told the Global Times on Wednesday."In education, China and the UK are strongly complementary, as China has a math teaching method, and the UK could export English teaching," Li noted.Chinese students in UKMore than 90,000 Chinese students attended university in the UK during the 2015/16 school year. China is the largest source of foreign students in the UK, according to a report on news portal eol.cn.Apart from higher education, younger Chinese students studying in the UK also saw an increase of 21.3 percent in 2016 - the youngest applicant was just six years old, according to a report sent to the Global Times on Monday by Beijing New Oriental Vision Overseas Consulting.A student surnamed Luo who recently graduated from the University of London told the Global Times that the education systems in China and the UK could learn the advantages of the other. "I hope more children could have an opportunity to be exposed to different education forms in the two countries."Li said cooperation in education and culture could help improve Sino-British relations."In the future, China and the UK could deepen education cooperation in high-end areas, such as artificial intelligence and the economy," Li said.May's three-day visit to China is the first by a British prime minister since Chinese President Xi Jinping's visit to Britain in October 2015 when both sides agreed to embrace a "Golden Era" of bilateral relations, according to Xinhua.The UK should provide more support and be more active in Belt and Road initiatives if the Golden Era of the Sino-British relations is to be fully realized, Li said.  "By enhancing mutual trust, the two countries could share opinions and bring benefits to their people," Li noted.