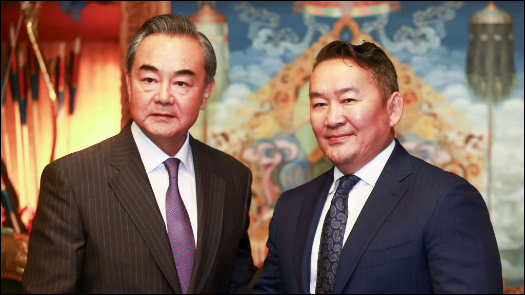 Wang said the two countries should expedite the talks on the signing of a FTA, so as to bring substantial benefits to both peoples.

Chinese Premier Li Keqiang made the call when he was hosting Mongolian Prime Minister Ukhnaa Khurelsukh in Beijing in April. Li said China and Mongolia should begin research into a free trade agreement and speed up the launch of a cross-border cooperation zone in a bid to make use of the two countries' complementary advantages.

The bilateral trade volume reached $6.7 billion in 2017, accounting for 63 percent of Mongolia's total trade. The two countries have set a $10 billion target for 2020.

Wang is currently on a three-day visit to Mongolia.

He praised the bilateral ties, saying China and Mongolia are close neighbors linked by mountains and rivers. Next year marks the 70th anniversary of the establishment of diplomatic relations, and China is willing to take the opportunity to lay out a new blueprint for the future development of bilateral ties, Wang said.

Mongolia hopes to strengthen collaboration in such fields as agriculture, animal husbandry, economy and trade, tourism, and infrastructure construction, so as to bring benefits to both peoples, Battulga said.

'Belt and Road Initiative is no Marshall Plan'

Regarding China's proposed Belt and Road Initiative, Wang Yi applauded Mongolia's active participation and called on efforts to deepen collaboration under the framework.

China is ready to strengthen interconnection and mutual trust with Mongolia within the framework of the Belt and Road Initiative, improve both peoples' livelihood, boost people-to-people exchanges, and continuously promote the cooperation between China, Mongolia and Russia, Wang said.

Wang stressed the Belt and Road Initiative emphasizes public goods that China wants to provide to people all over the world.

It is neither China's Marshall Plan nor a geopolitical instrument, Wang told reporters at a joint press conference with his Mongolian counterpart Damdin Tsogtbaatar.

The Belt and Road Initiative is always based on mutual benefits and trust, transparency and green growth, and the framework abides by international rules and laws in different countries, Wang stressed.

Landlocked Mongolia has also been using China’s transport network as well as its commodities exchanges in order to gain access to foreign markets.

Wang also met governors from five provinces in western Mongolia on Friday and they exchanged views on regional cooperation.

The five provinces in western Mongolia are bordered or adjacent to China. In recent years, their cooperation with China, especially China's Xinjiang Uygur Autonomous Region, has been fruitful, said Wang.

He said China will encourage more Chinese enterprises to invest in the region and the five provinces should take the opportunities brought by China's Belt and Road Initiative.

The five governors expressed their willingness to enhance cooperation with China in areas like husbandry, border trade, tourism and infrastructure construction via the Belt and Road Initiative.