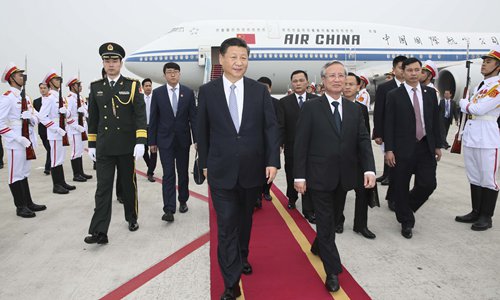 Chinese President Xi Jinping began a state visit to Vietnam on Sunday as relations with the Southeast Asian nation continue to improve, arriving in Hanoi on his second visit to Vietnam as China's head of state.Before flying to Hanoi, Xi concluded a busy two-day stay in the country's central city of Da Nang, where he attended the 25th Asia-Pacific Economic Cooperation (APEC) Economic Leaders' Meeting.In Hanoi, Xi, who is also general secretary of the Communist Party of China (CPC) Central Committee, held talks with Nguyen Phu Trong, general secretary of the Central Committee of the Communist Party of Vietnam (CPV), and met with Vietnam's President Tran Dai Quang.The visit comes on the heels of the 19th CPC National Congress and is a way to reciprocate for the visits to China by Trong and Quang earlier this year.Xi and Nguyen agree to handle sea disputes in a proper fashion and push cooperation to contribute to peace and stability in the South China Sea.Nguyen congratulated Xi on the success of the 19th CPC National Congress and his reelection as general secretary of the CPC Central Committee, and thanked him for China's assistance in the liberation and development of Vietnam. He said Vietnam supports China in playing a bigger role in international and regional affairs.In a signed article on November 9 in Nhan Dan, the official newspaper of the CPV, Xi said that, more than ever, China and Vietnam need to make a joint effort in their dreams of national strength and prosperity.The two countries have seen real progress in the strategic alignment of their development - China's Belt and Road Initiative and Vietnam's "Two Corridors and One Economic Circle" plan - the latter of which covers regions that link China and Vietnam by land and sea.Bilateral trade has also seen rapid growth over the past few years, with China being Vietnam's largest trading partner for 13 consecutive years, while Vietnam is China's largest trading partner in Southeast Asia.China's Ministry of Commerce has said trade between the two is expected to reach $100 billion in 2017. China put $823.6 million into Vietnam in the first quarter of 2017, making it the third largest foreign direct investor of the country."It is really significant for the two leaders to strengthen top-level design and work together on a blueprint of future development," the Chinese ambassador told Xinhua."Sino-Vietnamese ties are recovering in spite of the friction of the past and China's rapid development and its progress with the Belt and Road initiative are bringing its neighbors closer," Shen Shishun, an Asia-Pacific expert at the China Institute of International Studies, told the Global Times.Stronger tiesTies between the two have suffered in recent years because of territorial disputes in the South China Sea, but with the adoption of a Code of Conduct in the South China Sea framework by Chinese and ASEAN ministers earlier this year, the conflicts have gradually subsided as the parties agree to resolve disputes through negotiations."More important, the two countries share a related socialist cause and China's experiences could shed some light on Vietnam's path for the future," Shen added.Vietnam faces similar domestic problems as China and is in need of boosting confidence, experts say. "The success of China's 19th CPC National Congress has confirmed the status of the CPC and China's achievements could boost the Communist Party of Vietnam's confidence on the path it has chosen," Shen concluded.