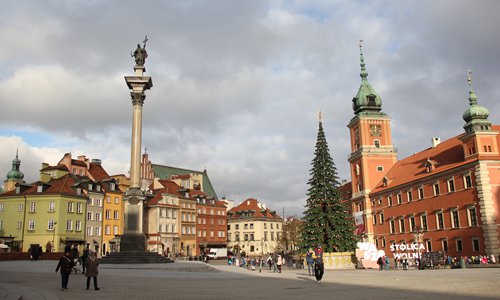 People walk around the city center of Warsaw in December. (Photo: GT)

Editor's Note:China and Poland are going to celebrate the 70th anniversary of diplomatic relations. Poland as one of the major powers among the Central and Eastern European (CEE) countries has been playing a key role in China's cooperation with the region vis-à-vis the Belt and Road initiative. Global Times reporter Shan Jie (GT) recently interviewed Liu Guangyuan (Liu), the Chinese Ambassador to Poland.

GT: What have been the recent achievements of China-Poland relations?Liu: Poland was one of the first countries to start diplomatic relations with China. Since the new century, political trust has been growing with cooperation deepening in all areas. In 2015, Polish President Andrzej Duda visited China. In 2016, Chinese President Xi Jinping visited Poland. During President Xi's visit, bilateral relations developed into a comprehensive strategic partnership and entered a "new era."First, policy integration has been deepened. China and Poland have become each other's valued diplomatic priority and partners. The leaders of the two countries have held regular meetings and exchanged opinions on issues concerning both countries. The exchanges at all levels have been frequent, and the cooperating mechanism is complete. Meanwhile, there are 36 pairs of twin provinces or cities between China and Poland now.Cooperation is improving under the Belt and Road initiative and 16+1 cooperation framework. At the end of 2015, China and Poland signed the MoU on Belt and Road cooperation. Second, practical cooperation has accelerated. From 2012 to 2017, China-Poland trade has grown at an annual rate of 8 percent. By October this year, bilateral trade reached $20.1 billion, a 17.4 percent year-on-year increase. Third, people-to-people exchange has been dynamic. There are now 1,500 Chinese studying in Poland, with 1,400 Polish students in China. A total of 14 universities in China now provide courses in Polish language. This year, Chinese tourists to Poland are expected to reach 180,000. On the whole, China-Poland relations have seen an all-dimensional and multi-tiered development.

GT: What kind of Chinese companies are investing in Poland?Liu: The investment by Chinese companies in Poland has been increasing steadily in the past few years, and the technology content has been growing. TCL, Liugong Machinery Co Ltd and Nuctech have been developing well. TCL has also opened its R&D center for Europe here.Meanwhile, Chinese products are popular here. Huawei has built a CEE headquarter in Poland. Its technology is widely recognized among Polish people. Xiaomi stores are found in major malls of Poland. DJI's drones are favored by polish customers as well. The brand image of "Made in China" is obviously improving.Meanwhile, Chinese companies also pay attention to social responsibility, promoting localization, operating legally and participating in public welfare. They have contributed to the social and economic development of Poland.

GT: Chinese companies met some barriers earlier in Poland. How has the investment environment improved in the country?Liu: Chinese companies started relatively late in CEE. Most companies began to focus on the region after the Belt and Road initiative was proposed. Therefore, a process of increasing understanding and adaptation is needed for both sides. In recent years, Poland has kept improving its investment environment. China's advantages in finance, technology and management are now recognized by Poland. However, as an EU country, Poland has to comply with EU laws, including government procurement regulations. Besides, Poland's laws are also complex so that some Chinese companies could not yet bring their potential into full play. We hope to strengthen our communication with Poland on promoting bilateral investment cooperation. We also hope Poland can make it more convenient for Chinese companies to enter the Polish market.

GT: Poland is a big power in the CEE region. What role do China-Poland relations play in China-CEE relationship?Liu: As a traditional country in the CEE area, Poland's population and its GDP account for 1/3 of CEE countries. Our bilateral trade also accounts for 1/3 of trade between China and CEE. Thus, the three "1/3" have an outsize influence and could also prove the significance of China-Poland relations within the China-CEE relationship.In the past few years, China and CEE countries have been working together actively under the 16+1 framework. The practical cooperation has deepened. Poland plays a leading role in the 16+1 cooperation. In 2012, the first meeting of 16+1 leaders was held in Warsaw.It should be emphasized that the 16+1 cooperation is the win-win, open and transparent cross-regional cooperation based on shared interests and practical needs of China and countries in the region. China highly values strengthening communication and cooperation with Poland on the 16+1 cooperation framework, and wishes Poland can use its position to promote the framework and the China-CEE relationship. We believe China-Poland bilateral cooperation will improve and accelerate under the 16+1 framework.

GT: Next year will mark the 70th anniversary of the establishment of diplomatic relations between Poland and China. What is your expectation of the bilateral ties?Liu: During the past 70 years, the two countries have experienced changes in the international situation, maintained stable development of bilateral relations, and forged a profound traditional friendship. The two sides do not  have conflict of interest. We only wish to support and cooperate with each other. Currently, the China-Poland relationship has been moving on the fast track, more energetic than any time.Looking into the future, China and Poland should maintain frequent high-level exchanges, deepen political trust and build a good environment for cooperation in all areas. We should promote practical cooperation in trade, investment, technology, culture and education and find new areas of growth. We should promote people-to-people exchanges, enhance coordination in international affairs and build the community of a shared future for mankind.I believe if China and Poland could work as equal and respectful partners and utilize each other's advantages, a comprehensive strategic partnership could be developed continuously, and people from the two countries would receive more benefits. I am very confident on the China-Poland relationship.