BRI NEWS Chinese Ambassador to US: 40 years of relations have built a strong bridge

Chinese Ambassador to US: 40 years of relations have built a strong bridge 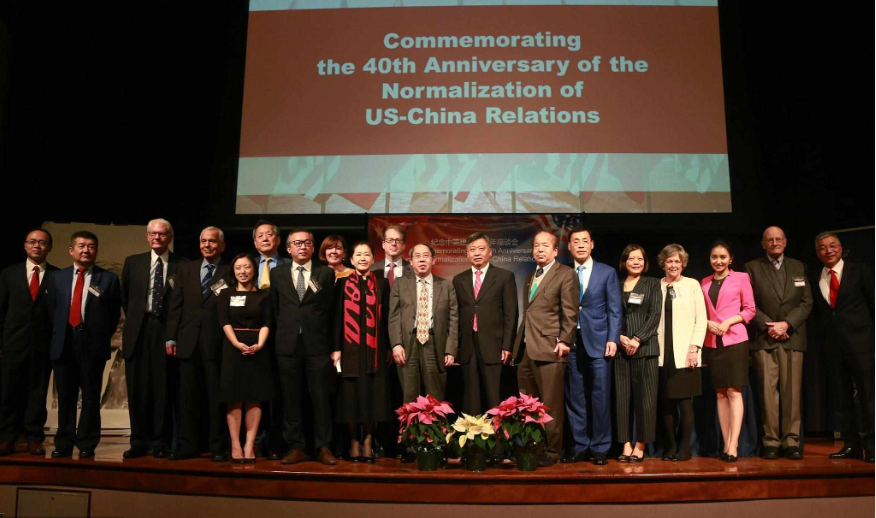 An event is held in Atlanta, Georgia commemorating the 40th anniversary of the normalization of the US-China relations, December 15, 2018. (Photo: VCG)

After 40 years of diplomatic relations, the relationship between the US and China is currently frayed.

Trade tensions started last year when Washington put tariffs on Chinese goods worth $250 billion and threatened duties worth double the value of products. Beijing responded with tariffs on American goods worth $110 billion.

Then on December 1 of last year, Chinese President Xi Jinping and his US counterpart, Donald Trump, agreed to postpone additional tariff hikes by 90 days while they negotiated.

As the trade talks continue, the Chinese Ambassador to the US Cui Tiankai, said that though currently frayed, the two countries have "built a very strong bridge" in four decades.

"I remember there's an English song, 'Bridge Over Troubled Water,' so we have to continue to build and enhance this kind of ties," said the ambassador, who's been in this role since 2013.

People-to-people ties, the interdependence of the two economies, and the common interest and mutual needs between China and U.S. are all elements of the bridge, continued Cui.

Not everyone is as optimistic as the ambassador. Some have advocated for the decoupling of the two economies, including separating investment, technology control, and people-to-people exchanges.

This view is unrealistic, argues Cui. In light of the growing interdependence among the countries, decoupling goes against the historical tide, along with economic and technological logic, according to Cui. These actions are due to fail and the involved people can be said to "lift the rock only to hit themselves."

The latest data about U.S.-China trade volume in 2018 can be one of the best indicators of the increasing interdependence between the two countries. China's combined imports and exports to the U.S. increased 5.7 percent year-on-year, totaling 618 billion U.S. dollars last year.

China's total foreign trade in 2018 was about 4.5 trillion U.S. dollars, an increase of 9.7 percent year-on-year. In addition to the Davos Forum, the Belt and Road Initiative and the first-ever China International Import Expo, China has not only actively participated in globalization but also provide public goods to the world stage.

As President Xi Jinping said in his 2019 New Year speech, China's reforms will never stop, and its doors will only open wider. In Cui's view, China has been quite consistent in its attitude and has gotten closer to the rest world compared to 40 years ago.

For a relationship with the U.S., China wants to establish a strong and stable relationship centered on coordination, cooperation and stability. And for the world, it strives to work with others to build a community of nations with a shared future.