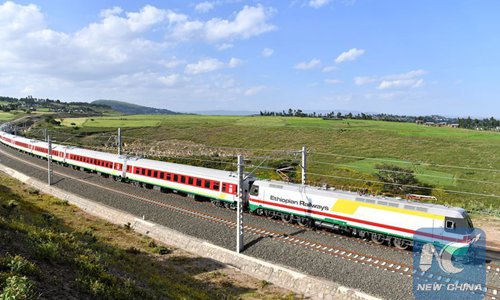 A train runs on the Ethiopia-Djibouti railway during an operational test near Addis Ababa, Ethiopia, on Oct. 3, 2016. (Photo: Xinhua)

Officials from the African Union (AU) and African diplomats have hailed the Chinese-built Ethio-Djibouti railway as a project that helps Africa realize its aspirations of development and integration.
The Chinese Mission to AU on Friday organized a train trip event, with officials of the pan-African bloc as well as African and other international diplomats on board of the Ethiopia-Djibouti standard gauge railway that links the two East African nations.
The event, which also included a visit to a Chinese-built industrial park in Adama town about 80 km away from Ethiopia's capital Addis Ababa, was to enable the participants to witness projects carried out through Sino-Africa cooperation as well as the cooperation under the Belt and Road Initiative, according to Kuang Weilin, Head of Chinese Mission to AU.
"The Forum on China-Africa Cooperation (FOCAC) summit in Beijing will be held very soon, and the theme of the summit will be the Belt and Road Initiative and Africa's Development. That is why we organize this trip so that we can have the opportunity to take a look at the railway, to see the early harvest of the Belt and Road Initiative," he said.
The Chinese-built 756 km electrified rail project connecting landlocked Ethiopia to Djibouti, was contracted by two Chinese companies, namely the China Rail Engineering Corporation and the China Civil Engineering Construction Corporation.
Rossette Nyirinkindi Kataungye, AU Advisor on Regional Integration, said the railway project is a demonstration carried out with China's commitment to supporting Africa in realizing the continent's aspirations for development and integration.
"It is a really wonderful project that shows that Africa is integrating, when you have country like Djibouti, which has the coastline and a port that we can use; this is a way of having shared resources, shared vision. It is an excellent project," noted the Advisor.
Katungye said China has proved that it is a "very good" partner for Africa's development as well as cultural ties.
"They (the Chinese) have demonstrated that they can stand by us to achieve our aspirations; and especially on infrastructure, this is a very good example of that very good cooperation," she said.
"Many countries in Africa have embarked on similar programs; for instance in East Africa, the standard gauge railway, again with cooperating with Exim Bank (China)." she added.
Levi Uche Madueke, Head of AU Strategic Partnership, said the Ethio-Djibouti railway project is the product of Sino-Africa cooperation, which aims at mutual benefits.
"What we are witnessing today is a very good thing; it makes us happy, because we are beginning to realize our vision which is about African development and integration," said Madueke.
"This railway project is a part of the cooperation program that we have, coming into reality; because linking Ethiopian people to Djibouti, is going to facilitate a lot of things, it is going to boost development process; it is going to boost issues related to trade; even people to people exchange... It is very good thing that we are experiencing today," he said.
"This is actually very good example to other African countries; this is part of integration program; and we believe that it will be replicated in other regions," he added.