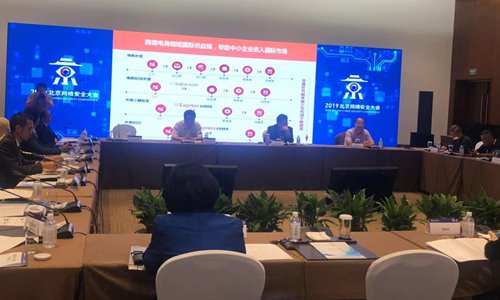 China's major internet enterprises valued the opportunities in overseas markets thanks to the Belt and Road Initiative (BRI) but also raised concerns of being the target of Western countries to hit at the Chinese government, said participants attending this year's Beijing Cyber Security Conference on Wednesday.
During the sub-forum on Exchange on Internet Enterprises to Go Overseas, senior officials from internet companies including China's e-commerce giant Alibaba, surveillance camera supplier Hikvision and Chinese tech giant Huawei discussed their layouts in other countries, especially those along the route of the BRI.
The sub-forum was co-hosted by the Qi An Xin Group, a leading security provider dedicated in protecting critical internet assets in government, finance, telecom and the China Association for Friendship.
Jack Ma's Alipay has broken into the e-payment market in Cambodia, Laos, the Philippines and Myanmar to serve Chinese tourists. This follows previous launches in Singapore, Malaysia, Thailand and Vietnam. Alibaba Cloud, a cloud computing company, has established data centers in Singapore, the Middle East and Europe.
Venustech, which claimed to be the leading provider of network security products and specialized security services and solutions, also signed a strategic cooperation agreement with the association to promote network security in BRI countries as part of the Digital Silk Road Initiative.
Qi Xiangdong, chairman of Qi An Xin Group, said the company has cooperated with other countries' governments to provide cybersecurity training services.  Other companies also provide solutions that help prevent cyber attacks on BRI countries.
However, some companies have also become the target of Western countries and media, claiming cyber threats.
Hikvision Vice President Wang Bin said that in 2018, sales of the company's major overseas businesses dropped from 400 billion yuan ($56.6 billion) to 240 billion yuan after Western media reported the US was considering blacklisting the firm for its involvement in Xinjiang Uyghur Autonomous Region.
"The US government could not provide concrete evidence to impose actual sanctions on Hikvision," Wang said, noting that the company has taken measures, such as opening transparent code centers for governments and institutions in North America and inviting third-party audits.
"Cyber security products are like bodyguards. Whether Cybersecurity companies can access overseas markets depends on the mutual trust between governments," a senior official from a cybersecurity company told the Global Times on condition of anonymity.
China has been establishing a "Digital Silk Road" across the BRI network which focuses on constructing and expanding telecommunications infrastructure and promoting digital exchanges.
In 2017, China's State Information Center released a guidance document called "Leveraging the 'Belt and Road' to Accelerate the Growth of Cybersecurity Enterprises in China" to encourage China's cybersecurity firms to go out and invest in countries along BRI routes.