KHARTOUM, Sept. 25 (Xinhua) -- The Chinese embassy in Khartoum on Wednesday celebrated the 70th anniversary of the founding of the People's Republic of China (PRC). 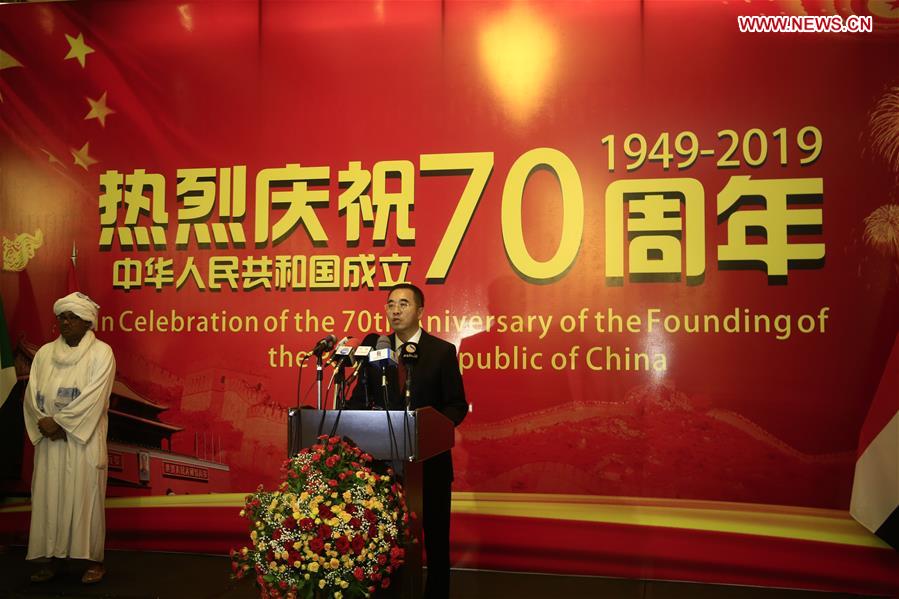 Chinese Ambassador to Sudan Ma Xinmin speaks during a reception to celebrate the 70th anniversary of the founding of the People's Republic of China (PRC) in Khartoum, Sudan, on Sept. 25, 2019. (Photo: Xinhua)

Chinese Ambassador to Sudan Ma Xinmin held a reception at Al Salam Rotana Hotel in Khartoum in presence of Sudan's Minister of Finance and Economic Planning Ibrahim Elbadawi and representatives of the diplomatic corps accredited to Sudan.

Ma said in a speech at the reception that China always holds high the banner of multilateralism, calls for building a community with a shared future for mankind, pursues win-win cooperation and respects cultural diversity.

"This year marks the 60th anniversary of the establishment of diplomatic ties between China and Sudan," said Ma, adding that China is pleased to work together with Sudan to explore new opportunities for cooperation in various areas under the framework of the Belt and Road Initiative, the Forum on China-Africa Cooperation and China-Arab States Cooperation Forum.

For his part, Elbadawi commended China's achievements under the leadership of the Communist Party of China (CPC).

He also stressed the importance of Sudan-China ties.

"We are aware of the importance of the bilateral relations between the two countries which progressed until reached the level of the strategic partnership," Elbadawi said.

"We will remove all the barriers which hamper investment and competitiveness," he noted.