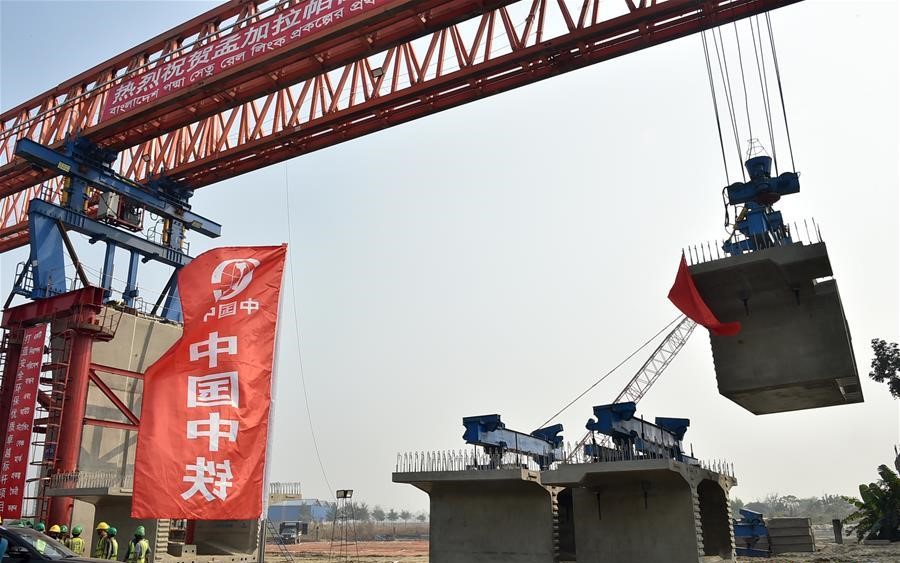 About two months into the commencement of a project linking capital Dhaka's central Kamalapur railway station with a western Bangladesh district, the Chinese engineers on Tuesday successfully installed the first box girder of the country's longest elevated railway.

Bangladeshi and Chinese government officials among others witnessed the installation process at Keraniganj on the outskirts of capital Dhaka.

The 17-km elevated railway is a part of China-financed Padma Bridge Rail Link Project which Bangladeshi Prime Minister Sheikh Hasina inaugurated by unveiling its foundation plaque at a ceremony in Munshiganj on the outskirts of Dhaka in 2018.

Steven Wong, project director of Padma Bridge Rail Link Project from CREC said since the commencement of this project, they had to overcome multiple difficulties such as complicated geological conditions, seriously adverse natural environment and huge works of land acquisition and resettlement.

"CREC turned a piece of drawing into an erected span of real box girder within merely 68 days! This is the speed of CREC, the best Chinese contractor!"

Chinese Ambassador to Bangladesh Li Jiming said, Padma Bridge Rail Link Project is of significance for both Bangladesh and China. For Bangladesh, it is a dream line and fast-track project directly supervised by the Prime Minister's Office.

It is a project that will provide the first direct rail link between southwest Bangladesh with central area. Such a direct link is going to shorten 200-300 km distance between Dhaka and southwestern cities such as Khulna and Darsana.

Thousands of Bangladeshi workers are working along the whole 169 km line of this mega project, and many local suppliers are involved in the supply chain.

It is a project through which abundant experiences and resources that China has gained in its infrastructure development are being shared with Bangladesh. It is a project that will prove that the Belt and Road Initiative is open, inclusive and beneficial to all the participants of the world, the Chinese ambassador said.