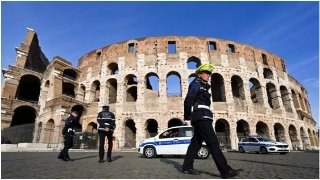 CHANGSHA/SHANGHAI, March 15 (Xinhua) -- Chinese companies have mobilized to aid the anti-coronavirus battle in Italy by donating medical supplies, winning the recognition of Italians.

Alessandra Zedda, vice president of the Autonomous Region of Sardinia, said on a video call that the company's donation reflected its social responsibility and proved the solidarity of the two peoples to fight the virus.

Consisting of 40,000 N95 respirator masks, 1,800 protective suits and 250,000 pairs of medical gloves which all comply with EU criteria, the medical supplies will be distributed to designated hospitals in Sardinia after arrival.

The company completed in 2016 the first cooperation between Chinese and Italian dairy enterprises by acquiring Italian dairy manufacturer Alimenta. It built a formula factory and sheep milk ingredient factory in Sardinia last year.

Zoomlion Heavy Industry Science & Technology Co., Ltd., a leading construction gear maker based in Hunan, on Friday shipped to Italy its first batch of 50,000 masks which will be distributed to the front line by the Lombardy regional government. The masks were manufactured by companies across Hunan, and comply with EU standards.

Zoomlion has also sent 20,000 masks to CIFA, a Milan-headquartered concrete machinery manufacturer it acquired in 2008, to help some 600 employees there fight the epidemic.

Li Bin, director of international business management at Zoomlion, said the company had received positive response from CIFA when the epidemic broke out in China, and is now willing to help.

The supplies were jointly donated by Fosun Foundation of the Shanghai-based Fosun Group, Longfor Group and Beijing Taikang Yicai Foundation.

"As a global corporation, we hope to be able to play a part in helping the world win this battle against the coronavirus as soon as possible," said Fosun International's chairman Guo Guangchang.

In early March, Guo called for the donation of medical supplies to some key countries facing increasingly serious epidemic situations via the Yabuli China Entrepreneurs Forum, receiving warm response from a number of Chinese firms.