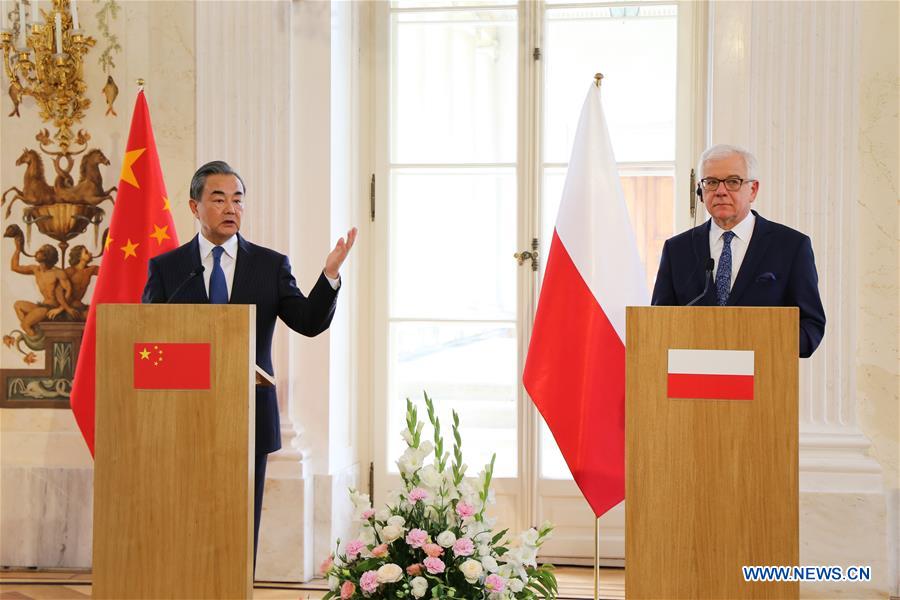 Noting this year marks the 70th anniversary of the establishment of diplomatic relations between China and Poland, Wang said bilateral relations have withstood the tests of changing international situations and maintained good momentum. During Chinese leader's visit to Poland in 2016, the leaders of the two countries agreed to elevate the bilateral ties to comprehensive strategic partnership, indicating the direction for future development of the bilateral ties.

China attaches great importance to the key role Poland plays as a major country among Central and Eastern European Countries (CEEC) as well as in the European Union (EU), Wang said, adding China stands ready to work with the Polish side to extend traditional friendship, build cooperation consensus, inject new impetus into bilateral relations, and push for the comprehensive strategic partnership between the two nations to run at the forefront of China-CEEC ties.

The Chinese foreign minister called on the two countries to strengthen strategic communication, maintain high-level exchanges in various fields, cement political mutual trust, and respect and give consideration to each other's core interests and major concerns.

The two sides should seize the cooperation opportunities of jointly building the Belt and Road Initiative (BRI) to boost infrastructural construction, production capacity, and Eurasian transport corridor so as to contribute to the global interconnectivity partnership, Wang said.

The Chinese market is open to Poland, and China is willing to import more Polish products to mitigate trade imbalance, Wang said, noting that China encourages its enterprises to invest and operate in Poland and hopes the Polish side will offer them fair, open and non-discriminatory business environment.

The two sides should also strengthen communication and coordination on international and regional affairs so as to boost stability and prosperity in Eurasia, he said. The Chinese official also hopes Poland can serve as a bridge linking China and Western countries as well as Asia and Europe.

On his part, Czaputowicz said Poland, located in the heartland of the Europe, is willing to actively take part in the joint construction of the BRI, strengthen bilateral exchanges, and play an active role in promoting China-CEEC cooperation and EU-China ties.

Poland welcomes Chinese investments, and will treat foreign enterprises according to international laws and business principles. Poland will not exclude Chinese enterprises or adopt any discriminatory measures against them, said Czaputowicz.

The two officials also on Monday attended the opening ceremony of the second plenary session of China-Poland Intergovernmental Cooperation Committee.