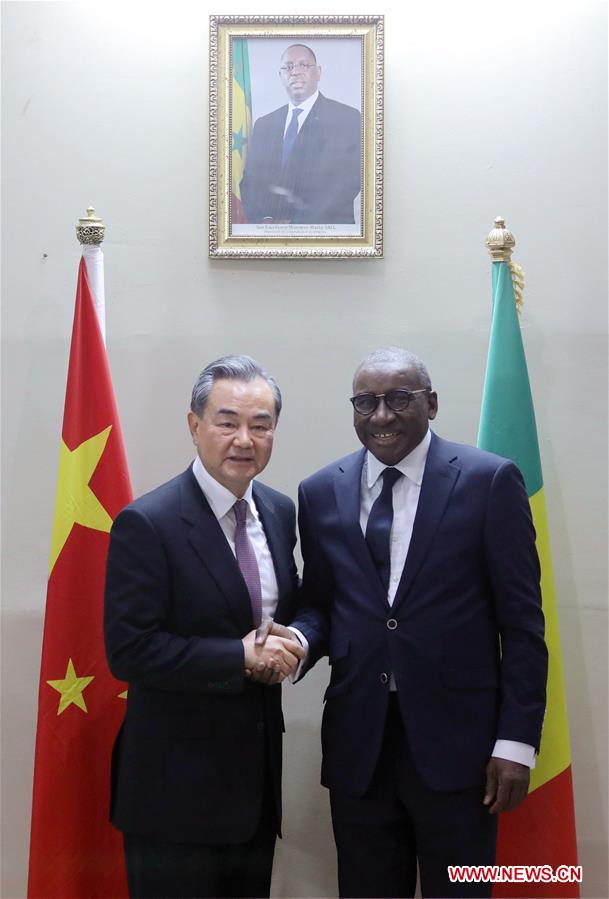 DAKAR, Jan. 7 (Xinhua) -- Chinese State Councilor and Foreign Minister Wang Yi on Sunday made six proposals on how to implement results from the Forum on China-Africa Cooperation (FOCAC) Beijing Summit in Senegal capital city of Dakar.

At a joint press conference following his meeting with Senegalese Foreign Minister Sidiki Kaba, Wang said China-Africa cooperation stands out with its pragmatism and effectiveness, which are also the unique advantage of the FOCAC. Right after the summit, the China-side Follow-up Action Committee set in motion to make plans, assign missions, draw roadmaps and list priorities with different African countries according to their respective situations.

China would like to coordinate closely with the FOCAC co-chair Senegal, and promote the efforts in the following six aspects, according to Wang.

The first is to build a closer community of shared future for China and Africa, Wang said, citing the rising of unilateralism and hegemony, which impacts the international order and multilateral rules, as a big challenge to the future of developing countries.

Wang said China, the largest developing country, and Africa, a continent where most of the countries are developing ones, have never been more aware of a shared future, and need to jointly overcome the obstacles that restrict our development and to safeguard the rightful interests of China, Africa, as well s that of other developing countries.

Secondly, we need to promote the integration of the China-proposed Belt and Road Initiative (BRI) and the African Union's socio-economic development strategy Agenda 2063, Wang said. Including Senegal, up to 37 African countries have signed documents on BRI cooperation with China, Wang said, adding that China is willing to work with Africa to explore more opportunities in the integration and make more fruits in the joint construction of Belt and Road.

Applying the FOCAC results to different African countries according to their respective situations is the third proposal of the Chinese envoy.

African countries have different situations and needs, therefore China will distribute its aid and investment case by case, taking account of both the targeted country's need and the benefit of whole Africa, Wang said, adding that the African Union's role of coordination should also be actively applied.

Fourthly, China will innovate its cooperation with Africa to make it more efficient, according to Wang. Chinese enterprises are encouraged to directly invest more in Africa, and align regional infrastructure construction with local industry development, so that African economy can generate the self-reliance momentum, decrease fiscal burden and financial risks, he added.

The fifth is to make sure that the results of the FOCAC summit benefit the peoples of China and Africa, Wang stressed, adding that the eight major initiatives proposed at the Beijing Summit of FOCAC will contribute to poverty alleviation, employment and income increase in Africa.

Last but not the least, joint actions of global partners are needed to promote Africa's development, Wang proposed.

China insists on open and transparent cooperation with African partners and welcomes more countries to invest in Africa on the basis that African wills are respected, African voice is heard and African need is met, Wang said.

Africa should be a stage for international cooperation instead of an arena for major powers to contest with each other, Wang concluded.