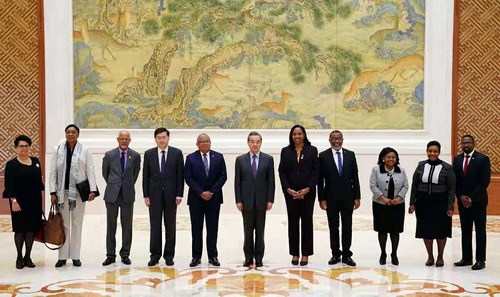 Wang made the remarks when meeting with representatives from Caribbean countries that have diplomatic ties with China.

Wang said China and the Caribbean countries had fostered a paradigm of relations of equal treatment and win-win cooperation between big and small countries.

He called on all countries to safeguard the international order with the United Nations at the core, as well as multilateralism based on international rules.

Stressing the importance of sustainable development, he called for intensified cooperation on the Belt and Road Initiative and jointly safeguarding the global and regional peace and stability.

The Caribbean countries stand ready to jointly construct the Belt and Road with China, and intensify coordination on climate change so as to safeguard common interests, said the Caribbean representatives who came to attend the seventh round of foreign ministries' consultations between China and their countries.