Wang said China prioritized China-Germany ties in its relations with Europe. Since bilateral ties have been upgraded to a comprehensive strategic partnership, relations between the two countries have entered a new phase of rapid development. 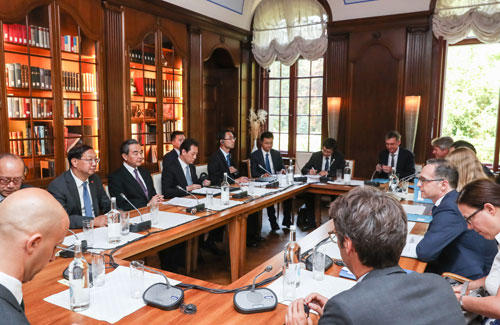 During German Chancellor Angela Merkel's China trip last week, leaders of the two countries agreed that China and Germany must set an example of win-win cooperation, take the lead in promoting China-Europe ties, advocate a new type of international relations and move beyond ideological differences, he said.

The Chinese side is willing to work with Germany in implementing the consensus of the leaders of the two countries, and strengthen cooperation in open trade and two-way investment, said the Chinese top diplomat.

China welcomes Germany to take part in the first China International Import Expo to be held in November, and stands ready to deenen cooperation with Germany in building the Belt and Road Initiative, Wang said.

For his part, Maas said as leaders of the two countries have reached important consensus in deepening bilateral comprehensive strategic partnership, Germany is prepared to strengthen high-level exchanges and strategic coordination with China.

"Germany and China are both major countries in trade and important trading partners of each other. The two sides should jointly safeguard the free trade system and oppose trade protectionism in a bid to safeguard our common interests," said Maas.

Germany, Maas said, appreciates China's moves to further open its markets and cut tariffs, which will help facilitate trade between the two countries, he said.

Germany is willing to continue to strengthen coordination with China on major international issues and safeguard multilateralism and the international order, he added.

The two foreign ministers also exchanged opinions on the Iran nuclear deal, the Korean Peninsula and other hotspot issues of common concern.