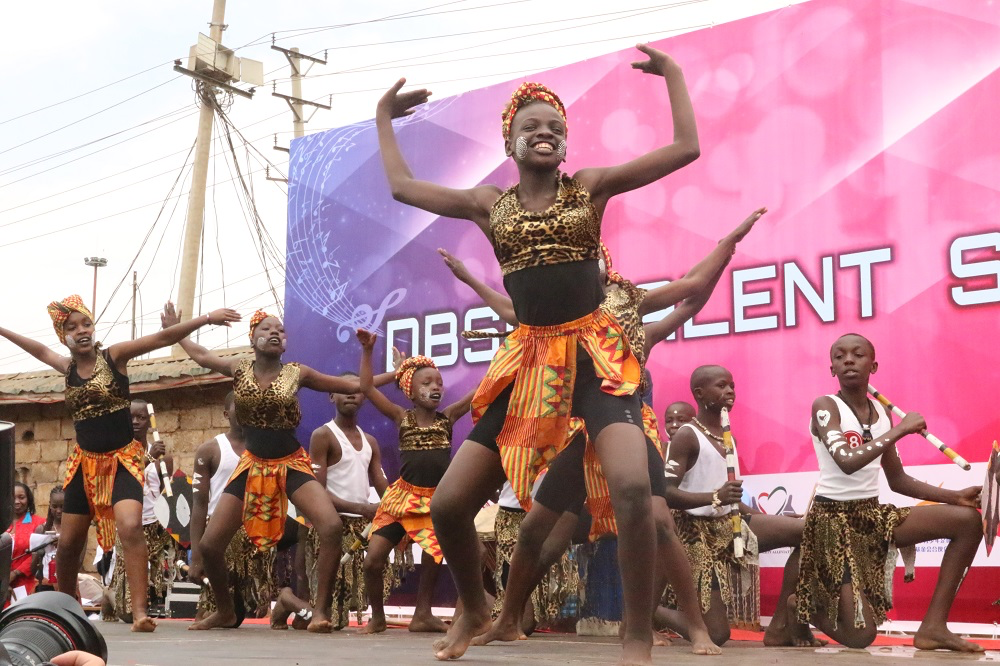 Esther Ayuma, a 16-year-old student in a secondary school, born and brought up in Mathare, the second-largest slum in Kenya's capital Nairobi, always admired and was passionate about dancing.

Convinced that artistic dancing is one of the best paying careers across the globe, she yearned for an opportunity to discover and nurture her talents but she lacked a platform.

The launch of an art program by Dream Building Service Association, a Chinese charity organization operating in the slum, was thus an unexpected and timely opportunity. She has been nurturing her skills under the organization since 2014 and has participated in four talent shows organized by the charity.

On Saturday, the organization's fourth talent show was held, where both younger and older children exhibited their dancing, modeling and artistic skills.

"My dream is to establish a dance group in the future, and to perform in events in and outside the country, as well as train young girls and boys to discover and nurture their dancing skills," she said. 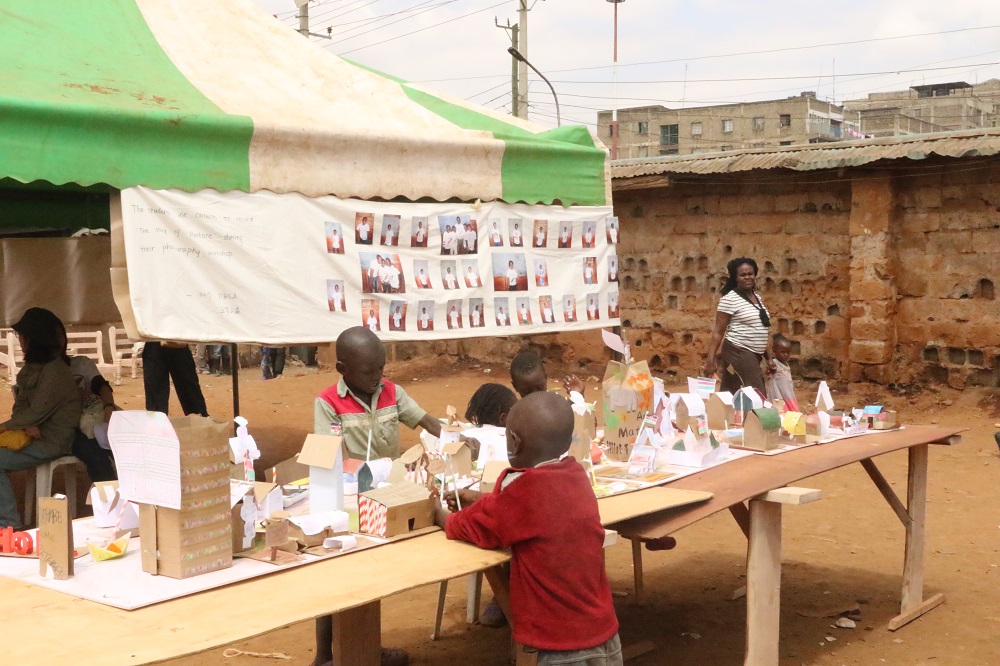 Children from Mathare display some of their art work of dream homes during a talent show held in Mathare on Aug 17, 2019. (Photo: China Daily)

Ayuma applauds the charity organization for such an initiative, saying it has provided healthy activity for the young slum dwellers who have been exposed to all manner of negative influences, ranging from drug abuse, crime, sexual abuse and early pregnancies.

"It's unfortunate that three-quarters of the girls living in the slums get pregnant at a very young age, thus dropping out of school. My desire is to use dance in the future to engage the young girls to shape their future lives," she said.

Lauryn Njeri, one of the local art trainers at the charity organization, knows well how the program has shielded young girls and boys from engaging in inappropriate behaviors, especially during school holidays.

Njeri, a 19-year-old woman who completed her high school education last year, has been training young girls and boys aged between eight and 14 years modern dance and photography for four months now.

"My dream is to take dancing to the next level. I want to use the children to tell stories about the social evils that take place in the slums and teach the youngsters why they should avoid the vices," she said. 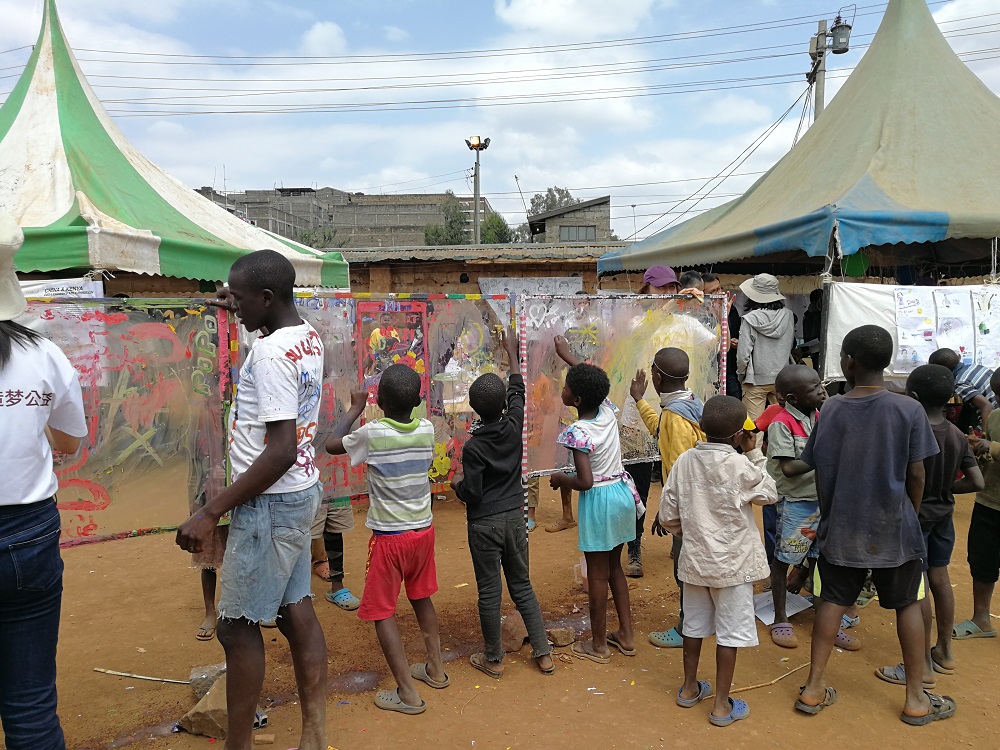 During the academic year, Njeri said the children, who hail from different schools, attend training on Saturdays and Sundays from 2-4 pm. However during holidays, they show up for training daily, an indication that they enjoy the activities.

"Attending the training on a daily basis has shield the girls and boys from engaging in peer-pressure activities like sex, drug abuse and crime. By the time they go back home, they are tired and just want to sleep. I'm truly grateful to the Dream Building Service Association for such an initiative," she said.

Chen Hong, a 22-year-old mechanical engineering major who arrived in Kenya four weeks ago, is one of the Chinese volunteers who is at the forefront to give the slum children a new lease of life.

Chen learned about the program in the Mathare slums following a lecture at his institution by the founder of the charity organization.

"I felt obliged to travel to Africa for the first time, and participate in helping youth to hone their art skills, which they can use in the future to earn a living. I'm enthralled by the skills and the confidence that the children are exhibiting," he said. 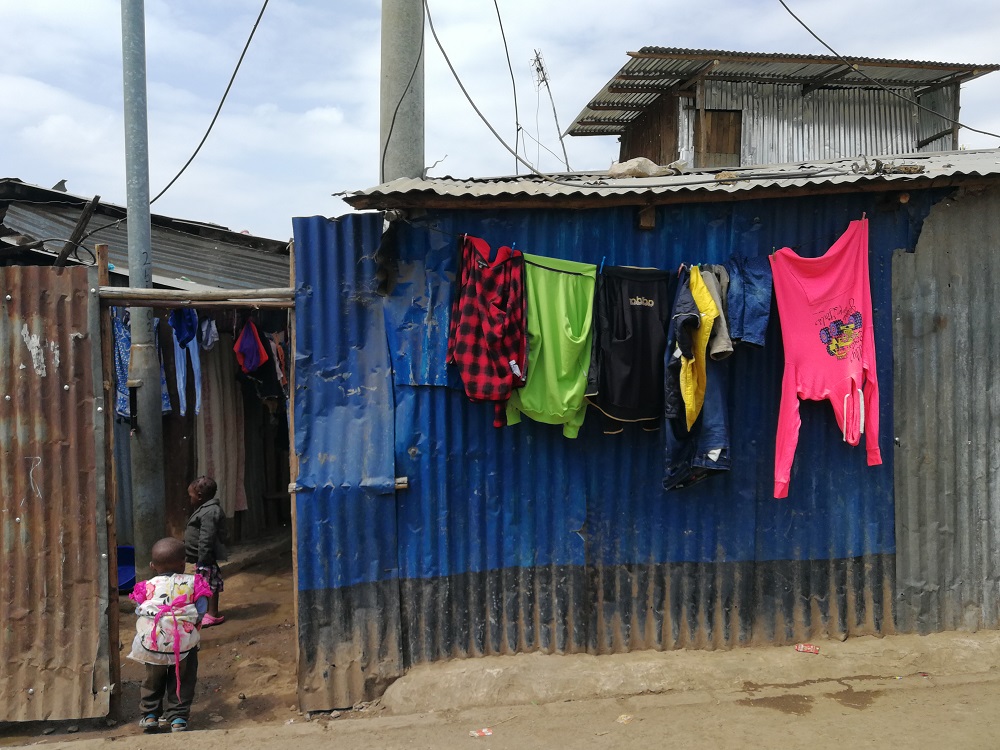 The house of an ordinary resident is seen in Mathare, the second-largest slum in Nairobi. (Photo: China Daily)

Liu Yimenghan, the co-founder of the charity organization, said after the talent shows that they usually identify older talents aged about 20 years to mentor, motivate and nurture younger talents who are about 10.

Liu said his organization has partnered with over 20 schools in the Mathare slums, where they are doing different projects, including a feeding program, talent show, art exhibition, soccer tournaments and waste recycling.

He said their volunteers have assisted young local artists to show their works at local or overseas events by organizing exhibitions and assisting project application, as well as bridging the young artists with the next generation in their partner primary schools in Mathare.

Deng Fei, the founder of a free lunch program for children who attended the talent show on his first trip to Africa, said he was challenged by the determination of the slum children and promised to increase his support.

"After the tour to the slum, I'm convinced we need to get more partners to help improve the general environment of the informal settlement, like renovating some facilities and constructing others, such as toilets," he said.