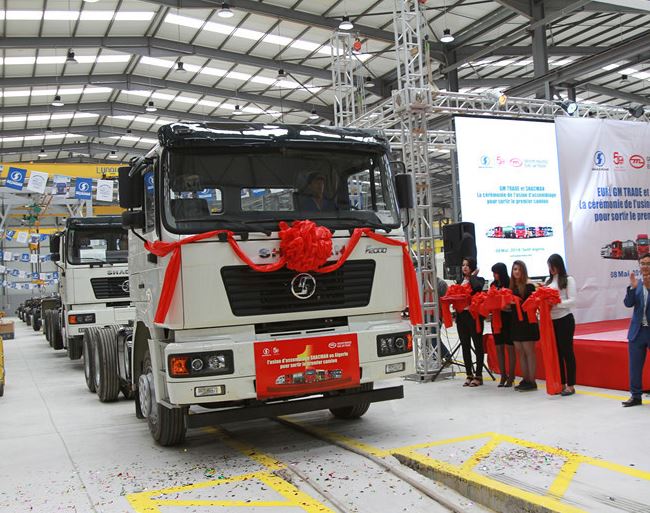 The first truck is off-line in Shaanxi Automobile factory cooperation with local businesses in Algeria on May 8, 2018. (Xinhua)

ALGIERS, Aug. 14 (Xinhua) -- He Houhua, a businessman from China's southeastern province of Fujian, came to Algeria in 2016 to set up a pipe manufacturing factory, with an aim to tap into the local pipe industry after careful market research.

Time has proven that He made a smart decision. Two years later, He's building the second factory to meet the rising demand for high quality pipes as Algeria bans pipes imports from Europe in order to save its foreign reserve.

"Algeria is a market with huge potential. I see great prospect of investment here," He said.

"Many new houses are built in Algeria every year and they need new pipelines," He recalled when he made the decision to invest in Algeria. "But the domestic supply of pipes cannot meet the growing demand, so the market has to rely on imports."

He Houhua is just one of many Chinese investors who have seized on the business opportunities offered by Algeria, the largest African country in size with rich natural resource reserves, which has been struggling to lessen its dependence on energy exports and diversify its economy by developing domestic industries.

In recent years, Algeria has found an ideal partner -- China, which has enough capital, expertise and will to invest in African countries, especially under the Belt and Road Initiative proposed by China in 2013.

The initiative, formally known as the Silk Road Economic Belt and the 21st-Century Maritime Silk Road, aims to build a trade and infrastructure network connecting Asia with Africa and Europe along the ancient trade routes of the Silk Road.

Chinese investors now play an important role in helping the Algerian government achieve its ambition, by bringing in large amounts of capital and advanced technologies to help develop the industries in the North African nation.

To cut down foreign exchange spending and develop its domestic industries, Algerian government has been attracting foreign investors to set up local factories, which He considered as a precious business opportunity.

He established his pipe factory in the Boufarik Industrial Zone, 40 km east of the capital Algiers, which occupies an area of 3,000 square meters.

The factory, including two production lines operating for 24 hours a day, produces 6 tons of pipes every day.

Its products, targeting the high-end pipes market, are sold at a higher price than other local products, but have been favored by the customers for the higher quality.

"I will never reduce the price at the cost of the quality, even it may boost sales," He said, arguing that only the products of good quality would be accepted by consumers in the long run.

To slash foreign reserves expenditure, Algeria has banned the imports of pipes, making it difficult for construction companies to find alternatives to high quality products which were traditionally imported from Europe.

After trying out the pipes produced by He's factory, local construction companies were convinced that they can perfectly replace the European products.

Shaanxi Automobile Holding Group, a state-owned heavy-duty truck manufacturer in China, started selling its products in 2007 in Algeria, where the trucks market was dominated by European brands such as Volvo, Renault and MAN.

But now the sale of the company's SHACMAN heavy duty trucks accounts for 70 percent of the local market. The company has created much-needed job opportunities by employing over 600 workers in its assembly factory co-built with Algerian partners.

The factory was built after the Algerian government called on foreign auto companies to establish factories here in 2015.

Algeria is eager to learn the auto manufacturing expertise and technologies as the government pledges to develop its home-grown car industry, said Yuan Hongming, chairman of the Shaanxi Automobile.

"This provides a chance for Chinese enterprises to expand their businesses in Algeria with their experience and technologies, which will eventually benefit both sides," Yuan said.

After years of marketing in Algeria, SHACMAN as a Chinese auto brand has gained substantial acceptance among local customers for its competitive prices, excellent services and flexible market strategies despite decades-long European dominance in the sector.

On May 8, the company rolled out its first truck assembled in Algeria. It has an estimated annual production capacity of 3,000 trucks.

Apart from meeting local demands, the trucks will be exported to neighboring countries including Tunisia, Morocco and Mali in the future.

Ahmed Mazouz, the Algerian partner of Shaanxi Automobile, lauded the high quality of Chinese trucks and the company's core value of integrity.

More and more Algerians choose to buy the SHACMAN truck, with some of them having driven it for more than 10 years, Mazouz told Xinhua in an interview.

This not only demonstrates the good quality of the Chinese trucks, but also creates a bond between the Chinese brand and Algerian customers, Mazouz said.

China has demonstrated its will to help Africa speed up its industrialization, said a report published by TSA, a major news website in Algeria.

The closer cooperation between China and Africa will benefit both, as it will boost the economy of African countries on one hand, and fulfill the aspiration of Chinese investors on the other, the report said.