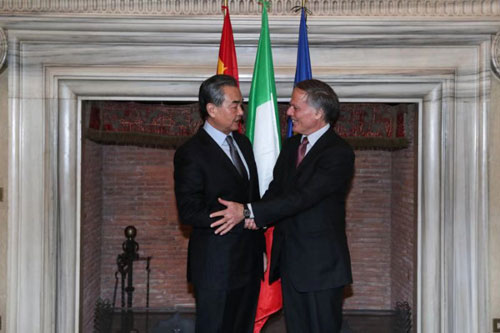 Wang called on both China and Italy to promote more top-level communication, strengthen pragmatic cooperation within the framework of the Belt and Road Initiative (BRI), and assured business communities in both countries of a strong commitment for win-win cooperation in the long run.

The two influential countries can join hands to play an important role in global affairs, Wang added. He said China is willing to boost coordination with Italy in multilateral affairs and work together to maintain a rules-based international order.

Wang also stressed that China's opening-up will go further and provide more opportunities for countries including Italy. China is willing to import more quality Italian products based on its own needs.

During their talks, Moavero said Italy and China are countries of cultural wealth and economic complementarity, in addition to having a long history of friendship. Moavero said Italy has long attached great importance to its relations with China.

Moavero said his country looks forward to closer top-level exchanges with China, as well as enhanced cooperation in areas such as trade, manufacturing, culture as well as historic preservation, among other fields.

Moavero praised China's investments in and assistance to Africa, which he said benefits development on the continent.

Italy is willing to strengthen communication and coordination with China in international and regional affairs and in multilateral institutions including the United Nations, he said.