"I have always wanted to learn Chinese. I plan to study in China after graduation," said Qodirova Sayora, a senior university student. 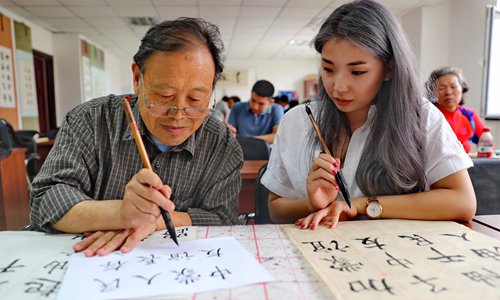 Students from countries involved in the Belt and Road initiative such as Tajikistan, Kazakhstan, Russia, and Mongolia learn to write Chinese characters in Qinhuangdao, North China's Hebei Province, on June 5, 2017. (Photo: VCG)

Two years after learning the Chinese language at the Confucius Institute of the Tajik National University for Nationalities, Sayora is now a die-hard Chinese culture fan. She is currently learning to play the Chinese zither, a 2,500-year-old plucked string instrument.

"It is very interesting to learn to play the zither, and that helps me learn Chinese," she told Xinhua after playing a piece of ancient Chinese music.

In Dushanbe, there are many young, passionate university students like Sayora, keen to learn Chinese and know more about the Chinese culture.

"The students are curious. They are especially interested in the Chinese characters -- the way they are written, what they mean, and how to speak," said Abdurahimova Shabnam, a Dushanbe-based mandarin teacher.

Luckily enough, now Tajik students have more opportunities to learn about the Chinese culture in a comprehensive way.

"We think it is better to learn a language through its culture," said Kossimov Fruh, the Tajik co-dean of the Confucius Institute.

The institute is doing everything to create a "Chinese atmosphere." The hallway walls are decorated by Chinese shadow puppets, which is a type of leather-made articulated cutout figures. Displaying on the two big shelves at the end of the hallway are various Chinese handicrafts.

Hanging on the wall of the calligraphy and painting workshop are an array of student works.

"I want to study in China. That is why I started to learn the Chinese painting and mandarin ... I want to pass the exam and go to a university in China in the future," said Karimov Parvis in the third grade.

The interest in learning the Chinese language is growing in Tajikistan. Official data show that currently, some 3,000 Tajik students leave for China to pursue further study on a yearly basis, up 50 percent from three years earlier. China is now the second largest host country for overseas Tajik students, after Russia.

Jia Jingfang, the Chinese co-dean of the Confucius Institute, said the "Chinese language craze" in Tajikistan comes largely as a result of the increasingly close relations between China and Tajikistan.

"Political and economic ties as well as cooperation in various fields have developed in depth and breadth. Increasing economic and trade cooperation, in particular, has stimulated the labor market demand," Jia said, citing Chinese investments in a large number of Tajik projects within the framework of the China-proposed Belt and Road Initiative (BRI).

In 2008, the institute had only 200 students, and now it has 4,000. And the institute has since established partnerships with 31 institutions and organizes over 100 cultural events every year, providing chances of practical training for the students.

"We have achieved notable development in the teaching of the Chinese language and the Chinese culture in the past 10 years," said the institute's Tajik co-dean Fruh.

Tajikistan and China are expected to further enhance ties at the 17th meeting of the Council of Heads of Government of the Shanghai Cooperation Organization held on Friday in Dushanbe.

Speaking of the future, Jia said the Confucius Institute will focus on language training and specialized knowledge of certain industries. "This is for the employment of the students while meeting the needs of Chinese companies operating in Tajikistan."