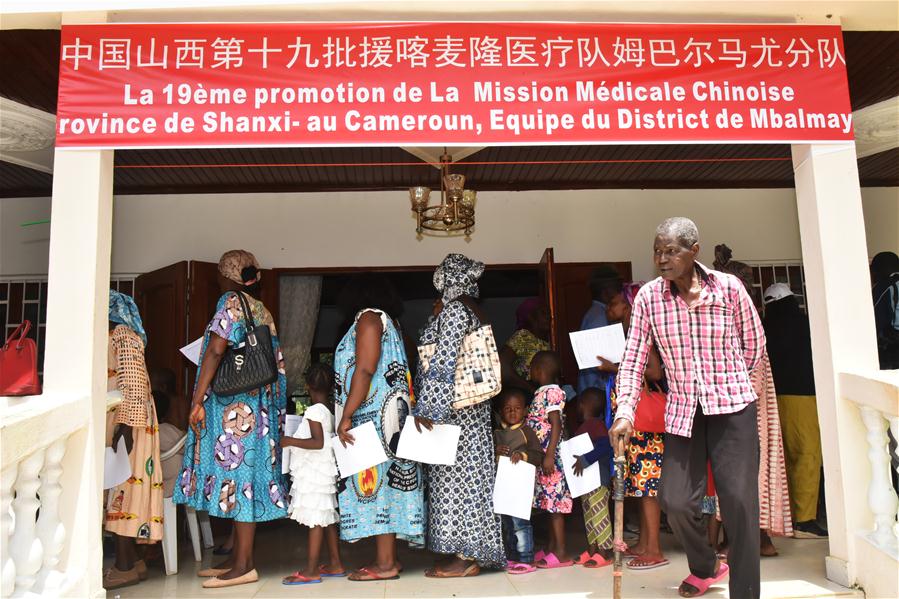 YAOUNDE, Aug. 18 (Xinhua) -- In early August, on the eve of the arrival of a medical team with free services, villagers gathered in groups of twos and threes, buzzing with tales of the wondrous Chinese doctors.

"Without them, I would have been dead" said Christophe Ndi Owona, the 76-year-old chief of the southern Cameroonian village of Ngat-Bane.

Before Chinese doctors came to his village, Owona had been suffering from severe headache for years. "Everybody thought I would die."

The team gave him medicine and advised him to stop drinking alcohol, Owona told his folks. "Thanks to the Chinese, I am now as healthy as a baby."

Ngat-Bane, like many other Cameroonian villages, has abundant wildlife and dispersed thatched huts, but zero hospitals. Villagers are often troubled by such health problems as rheumatism, typhoid, malaria, but most of them cannot afford medical services in Mbalmayo, the nearest town.

The next day, in the heartland of Ngat-Bane, a good number of patients from nearby villages gathered in a makeshift, but free and comprehensive clinic, lining up to see doctors from various departments, who are here as members of the 19th Chinese medical team to Cameroon.

For the first time in almost a year, 69-year-old Liliane Mfoumou felt relieved from her back injury after an acupuncture treatment. Before this, the mother of six had visited doctors several times in Mbalmayo, a major city in Cameroon's Central Province.

"Medical checkups and treatments in hospitals are quite expensive, and I can't afford them again," Mfoumou said, expressing gratitude to the free clinic.

A Chinese acupuncturist inserted fine needles in Mfoumou's skin at specific points. Thanks to this traditional Chinese method, which is applicable to many health conditions, Mfoumou said she "now can feel my back and legs."

Michel Ndi has insomnia and heart problems, making it difficult for the 59-year-old to trek to his farm. He consulted almost all the specialists and was offered free treatments, including medicine, for his multiple conditions.

"Their kind and friendly manner heals you even before you start treatment," said the father of 10 children, "I am sure that in the next two or three days, I will be able to go (to) the farm without difficulties."

The free clinic ran for more than five consecutive hours, after which the folks offered the Chinese medical team a local dish called Kpem, a traditional meal made from cassava leaves.

China started to dispatch medical teams to Cameroon in 1975 and hundreds of medical professionals have worked in Cameroon since then.