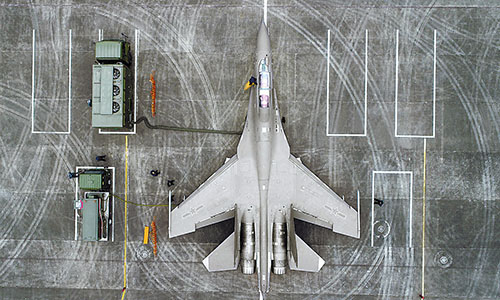 The Chinese People's Liberation Army (PLA) Air Force recently issued a new regulation ordering future aircraft to be painted with low observable coatings and standardized markings, a move aimed at giving Chinese warplanes a combat advantage as they will less likely be detected by both the naked eye and military radar.

The regulation mandates all new warplanes should have low observable coatings and markings, and in-service warplanes should also have standardized markings, including those of the national flag, Chinese Air Force insignia, and the Red Cross, the PLA Daily reported on Friday.

It is a combat requirement and development trend that military aircraft have low observable paintings to reduce visible detection, which also indicate combat capabilities, according to the regulation.

It was under this way of thinking that countries, including the US, developed low observable coatings and markings that would help planes blend into their environment, which has been proven to be useful during combat, Ordnance Industry Science Technology, a Xi'an-based magazine on the national defense industry, reported on Saturday.

China has also created low observable coatings and tested them prior to the new regulation.

Besides the J-20 stealth fighter jet that focuses on low observability for both the human eye and radars, China has been experimenting with low observable coatings on its J-16 fighter jet since 2018, the magazine reported.

The J-16, based on the non-stealth fighter jet Su-27, now features a dark gray coat instead of its original bluish-gray tone and has replaced its original Air Force insignia with a light gray design.

The new coat will provide the J-16 a level of stealth capabilities not only against the naked eye but also with electromagnetic devices, said Chinese Air Force pilot Jiang Jiaji last year on China Central Television.

Having tested the new coatings and markings on the J-20 stealth and J-16, which have proven to be technically mature and useful, the Air Force is ready to expand their use on all warplanes, including fighter jets, bombers, cargo planes, and special mission aircraft, said a military expert who requested not to be named to the Global Times on Sunday.

This will result in an overall combat capability boost for the Air Force, the expert said.

The new regulation will be implemented gradually throughout 2020, the PLA Daily reported.