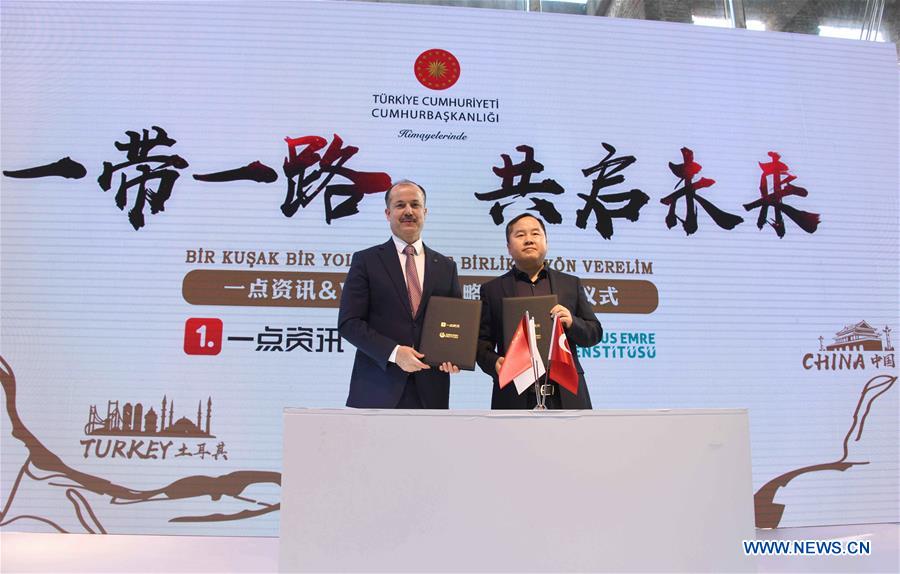 The deal builds on past cooperation between the two sides, in which Yidian Zixun provided to the non-profit Turkish institute big data related to the interests of Chinese netizens as well as premium Multi Channel Network-oriented services.

"We are working hard to strengthen academic and scientific cooperation between Turkey and China," said Seref Ates, president of the Yunus Emre Institute, which is under the Turkish Ministry of Culture and Tourism.

"The value-added projects that will be created within TABIP will contribute to the development of their relations even further," Ates said at the signing ceremony.

TABIP, or Turkey Academic and Scientific Cooperation Project, was launched by Ates' institute 10 months ago and has now some 230 programs with different institutions or companies around the world.

Li Ya, CEO of Yidian Zixun which boasts as many as 70 million daily users, voiced readiness to deepen exchanges and interactions with the Turkish side under China's Belt and Road Initiative, which is promoting opening up and sharing.

Ismail Gultekin, a deputy governor of Istanbul, spoke of the efforts being made to woo more Chinese tourists, companies and artists to Istanbul, including the establishment of a Chinatown, direction signboards with Chinese characters and more Chinese restaurants.

He called for opening more flights between Turkish and Chinese cities.

"We do our best to boost the close ties between the two countries located at the two ends of the Silk Road," he said.