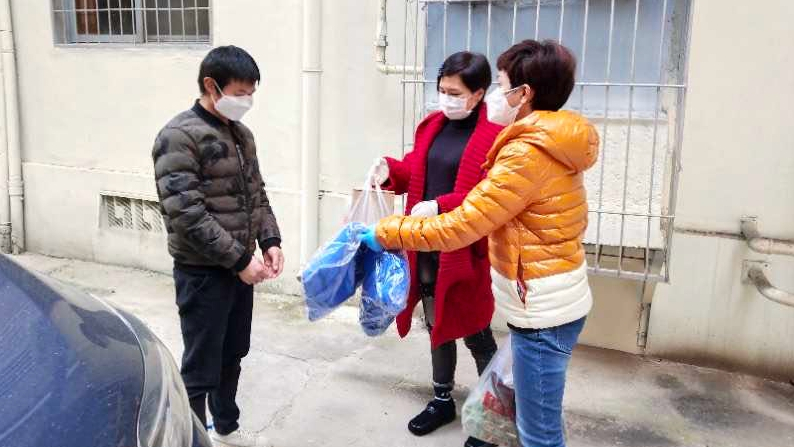 If he weren't in Wuhan for leukemia treatment, his mother said her son might be still alive. If he weren't later infected with COVID-19, Huang Daosheng said his younger brother could have recovered and they'd be back home in their village in southern China.

On the morning of February 7, the infection led to respiratory failure, then death of 31-year-old Huang Daoling.

Walking with their sorrows for nearly three hours after being unable to get a taxi on Wuhan's streets, the two took the only thing they still had left of Daoling's, his disinfected phone.

"I couldn't take the grief," Daosheng said. "My brother is gone. But you have to somehow keep going on."

On August 8, 2019, Daoling was hospitalized for leukemia. His lung was, however, infected after the first round of chemotherapy.

Breathing was difficult, and he suffered chest pain.

"I saw him struggling to breathe," the brother cried. "It's like he was leaving us."

The following two rounds of chemo went better, and the family thought they would have returned home soon. But his condition turned serious after the fourth therapy session in early January.

No specific medication could be given, and Daoling just took some pills for the flu, and some to improve his poor immunity.

The hematologists then realized his sudden symptoms and condition were potentially related to the epidemic. But it wasn't until January 20 that health authorities announced the novel coronavirus was transmittable between humans.

On January 22, Daoling was given a nucleic acid test. It came back positive.

The next day, Wuhan's lockdown began. Within 10 hours, all of the city's public transportation was suspended.

In the evening of January 27, Daoling was transferred to Jinyintan Hospital. And that was the last night his family saw him alive

"I thought he would have been cured there," the mother wept. "He told me he had arrived, and asked me if I slept."

In the end, though the mechanical ventilation was applied, the son didn't survive.

It was also during this period when the city was faced with critical challenges.

Medical resources were in short supply; hospitals were faced with a deluge of patients, and the potential for disease transmission was high. The government beefed up screening measures in more than 7,000 communities and tightened travel restrictions.

For Daosheng and his mother, whose hometown is about 250 kilometers away from Wuhan, their "mission" there is over, but they cannot leave the city.

"Online information says special permission is required to leave," he said. "Community service officers told me they were unable to issue us a permit."

All they can do is to wait, also waiting for his brother's urn to be given at the end of the epidemic.

Their family in neighboring Jiangxi Province is waiting for their return.

More than 100 households in their village were resettled in 2006 under the government's poverty relief policy. Still, leukemia means a huge economic burden for the rural family with limited means of income.

The first chemotherapy cost them about 200,000 yuan (30,000 U.S. dollars) and Daosheng borrowed half the money from relatives and raised some from a medical fund platform.

Seeing that the family couldn't afford certain therapies, he scrambled to use the rural medical allowance for low-income farmers.

"When insured, some 90 percent of the hospital expenses were covered," he said, noting it was quite a relief given the situation.

On February 27, Wuhan issued medical and financial aid to those stranded due to the travel ban.

During the epidemic, the 33-year-old asked his mother to stay indoors, and take care of the rest of the family. Before coming to Wuhan, he said he didn't care that much about the family, at least much less than his brother.

"I hope the epidemic ends soon, and mom misses home so much and wants to be back soon," Daosheng said. "I also hope I can help the family shoulder more of our burdens, especially the economic one."

The number of confirmed cases in Wuhan has reportedly dropped to single-digit this week, with signals that some cities within the province will end the lockdown upon receiving prevention ratings.