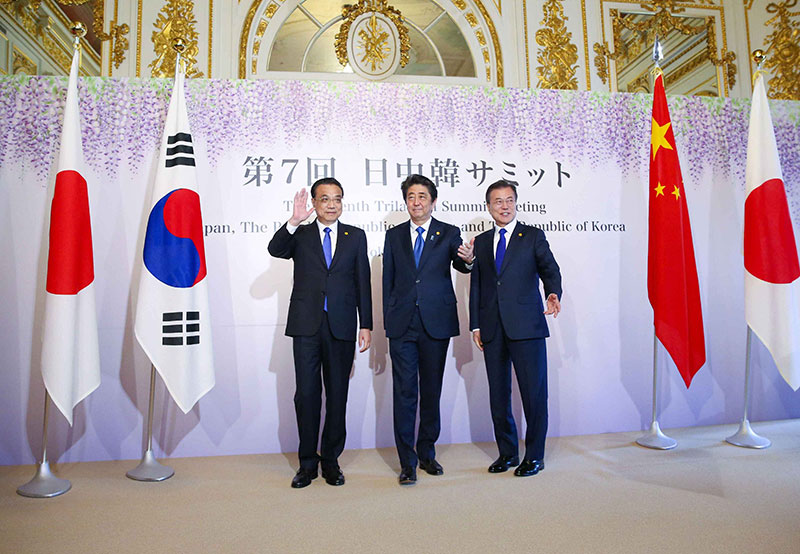 Cooperation among China, Japan and South Korea, as neighbors or regional major economies, has resilience and vitality with broad prospects, Li said while addressing a business summit of the three countries.

The Chinese premier urged the three countries to create a peaceful and stable environment for development, stick to the path of peaceful development, respect each other's core interests and major concerns, and properly handle sensitive issues and disputes.

As beneficiaries and advocates of globalization with the experience of being under the pressure of trade protectionism, the Chinese premier said, the three countries should jointly push forward globalization and safeguard free trade.

The Chinese premier also called for accelerating negotiations on a China-Japan-South Korea free trade agreement (FTA) and pushing for an early agreement on the Regional Comprehensive Economic Partnership (RCEP) so as to promote the building of East Asian Economic Community.

On expanding investment and industrial capacity cooperation, Li said, each of the three countries has its own advantages and the prospects for cooperation are broad. The Belt and Road Initiative is creating new room for their cooperation, he added.

Noting that the year 2019 marks the 20th anniversary of the launch of  the China-Japan-South Korea cooperation mechanism, Li urged businesses of the three countries to join hands to not only benefit the three countries but also provide new driving force for world economic growth.

Abe highlighted finance, science and technology as well as coping with the challenges of an aging society as areas where the three countries should enhance cooperation.

Moon urged the three countries to step up cooperation in such fields as research and development, energy, medical service, environmental protection and disaster management.