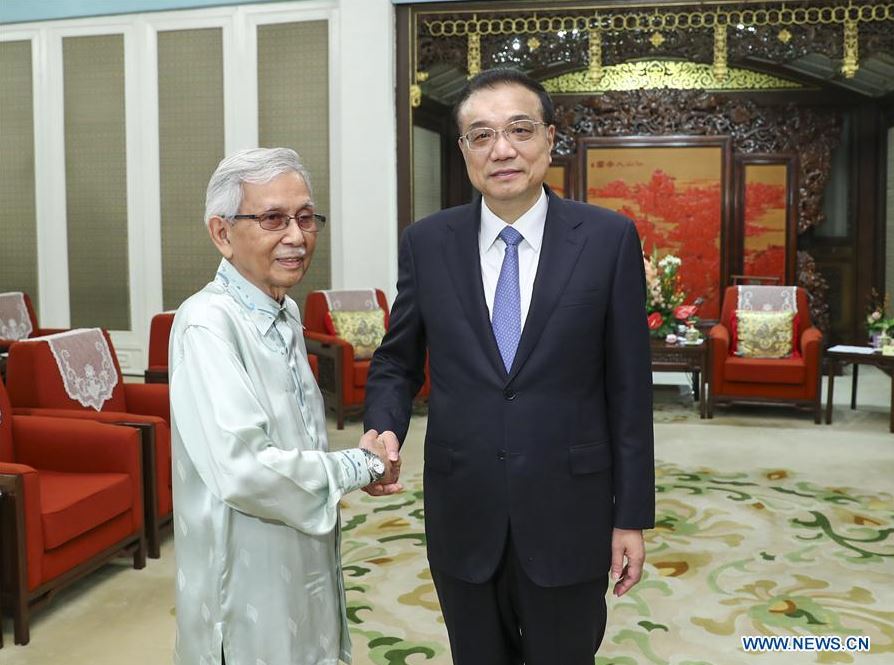 Zainuddin, who is also a member of a high-level advisory council set up by Mahathir, first gave Li a letter written by Mahathir.

In the letter, Mahathir, sworn in for his second term as prime minister on May 10, said the new government would continue to develop friendly ties with China and further enhance their bilateral comprehensive strategic partnership, adding that it welcomes Chinese enterprises' investment in Malaysia and is optimistic about the prospects of bilateral relations.

Hailing the traditional friendship between the two countries, Li said the visit by the special envoy testified that the new government of Malaysia attaches great importance to relations with China and hopes to see a stable bilateral relationship.

"China is willing to work with Malaysia to maintain a sound momentum of bilateral ties based on mutual respect and equal treatment, and better synergize the Belt and Road Initiative and development strategies of Malaysia," said Li.

He called for efforts to promote cooperation on major projects including industrial parks, coastal industrial areas, and transportation infrastructure, expand cultural and people-to-people exchanges and better benefit both peoples.

Li said a positive China-Malaysia relationship is conducive to both the people and the peace, stability, and development in the region.

Relations between China and the Association of Southeast Asian Nations (ASEAN) have improved steadily, and both sides expect to expand mutually beneficial cooperation, said Li, adding that Malaysia has made important contributions to China-ASEAN ties in the past.

China hopes that Malaysia will continue to play a constructive role in further advancing China-ASEAN cooperation, he said.

No matter what problems occurred in the process of developing bilateral ties, the two countries can always find a solution, he said, adding that Malaysia would like to work with China to forge ahead development of both countries, other Asian countries, and the China-ASEAN cooperation.