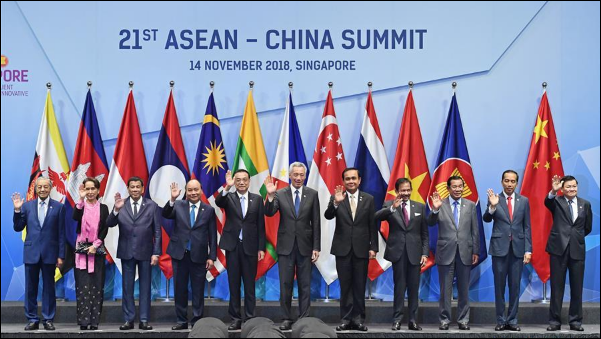 Chinese Premier Li Keqiang (5th L) poses for a group photo with other leaders at the 21st China-ASEAN (10+1) summit, which is also held to commemorate the 15th anniversary of the establishment of the China-ASEAN Strategic Partnership, in Singapore, Nov. 14, 2018. (Photo: Xinhua)

Chinese Premier Li Keqiang wrapped up his five-day trip to Singapore on Friday, during which he made a strong push for free trade, multilateralism and a code of conduct in the South China Sea.

With this trip, Li has visited all the ten member states of the Association of Southeast Asian Nations (ASEAN) as Chinese premier, showing the importance China attaches to its relations with the ASEAN neighbors.

Concerns about protectionist headwinds were obvious at the series of ASEAN-related meetings in Singapore, as Singaporean Prime Minister Lee Hsien Loong said: "The open, rule-based multilateral trading system which has underpinned the growth of ASEAN is under pressure."

Li offered China's assurance on its unswerving support for free trade and regional economic integration as he pushed for progress in talks on a key Asia-Pacific trade deal.

The region needs to "take concrete action to uphold rules-based free trade and to send a positive message of stable, predictable and law-based conditions for the market," Li said.

He urged leaders of countries negotiating the Regional Comprehensive Economic Partnership (RCEP) to unleash a strong "finishing kick" of the talks.

The talks are in the final stage. China hopes the deal can be sealed within 2019, Li said at the 2nd leaders' meeting on RCEP on Wednesday.

RCEP is being negotiated among the ten ASEAN countries plus China, Australia, India, Japan, South Korea and New Zealand.

It is expected to be one of the world's largest trading blocs, accounting for nearly half of the world's population and around a third of global GDP.

Li's trip to Singapore was also the first official visit to the city state by a Chinese premier in 11 years.

He made full use of the occasion to strengthen ties with Singapore.

On late Monday, Li and Lee witnessed the signing of an upgraded free trade agreement (FTA) between China and Singapore, among other cooperation deals.

China is willing to strengthen communication and coordination with the Singaporean side, deepen mutually beneficial cooperation, and continuously bring bilateral ties to higher levels, Li said.

In addition to the upgraded FTA, Li assured Singaporean investors of China's business-friendly policy and long-term economic prospect to boost trade and investment, at a welcome dinner hosted by local business organizations on Wednesday.

Li also expressed China's appreciation of the efforts by Singapore, which serves as the rotating chair of ASEAN this year, to promote China-ASEAN ties.

Lee said ASEAN and China should continue to find new areas of collaboration, take advantage of fresh opportunities presented by Industry 4.0, and work together to bring their "peoples and economies closer."

China wants to complete talks on the Code of Conduct (COC) in the South China Sea within three years, he announced at the 44th Singapore Lecture on Tuesday.

"We must have the COC" to avoid miscalculations and trouble in the South China Sea, Philippine President Rodrigo Duterte said, suggesting that any risks were from potential trouble with outsiders.

China and ASEAN already reached a Declaration on the Conduct of the Parties in the South China Sea (DOC) years ago, and have been seeking a more robust COC for enduring peace and stability.

Highlighting recent progress in COC talks and the trend toward greater cooperation and stability in the South China Sea, Li urged the involved parties to speed up consultations.

"In recent years, overall peace and stability in the South China Sea has been maintained, and is moving toward greater stability," Li said, adding that a COC would be "conducive to free trade."

Li said China and ASEAN have reached consensus on ensuring peace and stability, freedom of navigation in and flight over the South China Sea as indicated by the recent adoption of the single draft negotiating text of the COC.

"We all agreed on ways and means not to increase tensions in the South China Sea. And that means not bringing in warships and allowing for freedom of navigation," Malaysian Prime Minister Mahathir Mohamad told reporters.

Li also called for more maritime cooperation between China and ASEAN and making the joint maritime drill between the two sides a regular event.

During this visit, Li also witnessed a milestone in China-ASEAN relations: the approval of the China-ASEAN Strategic Partnership Vision 2030, at the 21st China-ASEAN (10+1) leaders' meeting on Wednesday.

The vision describes broad consensus between China and ASEAN on promoting trade and investment. The two sides have pledged to increase two-way trade value to a trillion U.S. dollars and investment to 150 billion dollars by 2020.

It also reaffirms China and ASEAN's commitment to expediting the negotiations on RCEP, and to working towards an early conclusion and adoption of COC in the South China Sea.

Li called the vision a blueprint for the long-term development of China-ASEAN ties. He hoped the vision would create synergy between the Belt and Road Initiative and the ASEAN Vision 2025.

The vision will lay a solid foundation for the strategic partnership between the two sides in the coming decades, ASEAN Secretary General Lim Jock Hoi said.