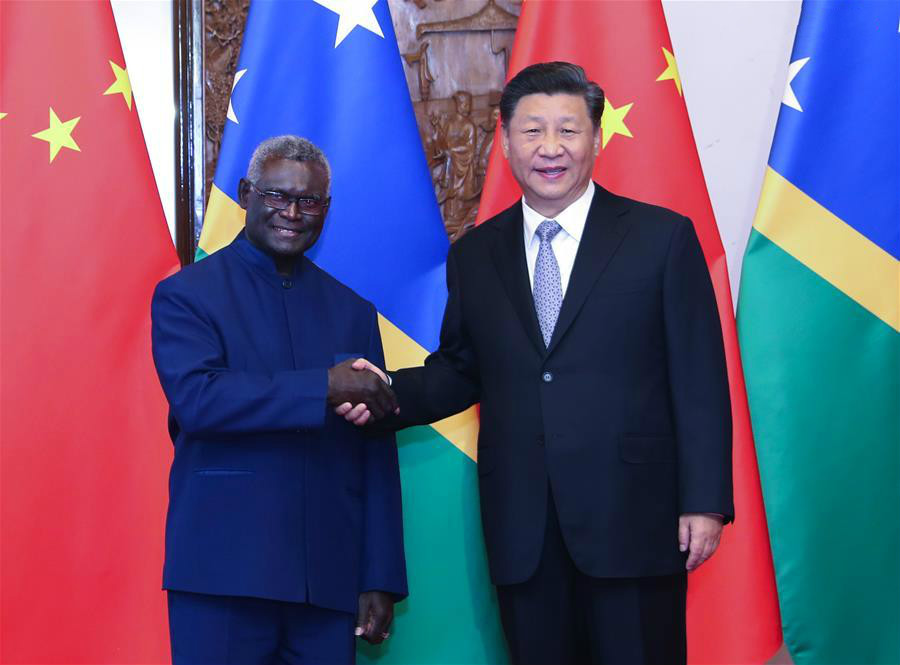 "Recently, China and the Solomon Islands have formally established diplomatic relations on the basis of the one-China principle, which conforms to the trend of the times and benefits the peoples of the two countries," Xi said during the meeting with the visiting prime minister at the Diaoyutai State Guesthouse.

China and the Solomon Islands signed a joint communique on Sept. 21 on the establishment of diplomatic relations.

Hailing Sogavare's China visit as a milestone, Xi said the friendship between the two nations will enjoy bright prospects although their diplomatic ties are newly forged.

"We are willing to work with the Solomon Islands to grasp the historic opportunity of the establishment of diplomatic relations and open up a bright future for the development of the bilateral relationship," Xi said, stressing mutual trust, respect and support and exploring cooperation in various fields.

Xi said the Solomon Islands is located on the southern extension of the 21st Century Maritime Silk Road. The two countries should take the opportunity of the signing of a Memorandum of Understanding on building the Belt and Road, align their development strategies and boost cooperation to help improve the Solomon Islands people's livelihood as well as the island country's capability of independent and sustainable development.

According to Xi, the Solomon Islands will become a tourist destination for Chinese citizens after the establishment of diplomatic ties, "which will generate great opportunities for people-to-people interactions, sub-national exchanges and tourism cooperation between the two nations."

Xi also welcomed the Solomon Islands' joining into the "big family" of cooperation between China and Pacific island countries.

China stands ready to boost communication and cooperation with the Solomon Islands within multilateral frameworks, including the United Nations and the Pacific Islands Forum, to address climate change and other challenges and safeguard the common interests of developing countries.

Congratulating the Chinese side on the 70th anniversary of the founding of the People's Republic of China, Sogavare said the Solomon Islands admires China's development achievements over a short period of time.

"Choosing to be on the right side of history," as well as the side of most countries in the world, the Solomon Islands recognizes the one-China principle and has established diplomatic ties with the People's Republic of China, said Sogavare, noting it is a solemn and solid political commitment that the Solomon Islands government has made.

Sogavare voiced his hope to learn from China's success and realize the prosperity of the Solomon Islands.

The Belt and Road Initiative is a great one, bringing great opportunities for the Solomon Islands, said the prime minister, adding that his country will cooperate with China on trade, investment, agriculture and fishery, tourism and other sectors for a new future of the bilateral relationship.

Sogavare also expressed his appreciation for China's care and support for the development of Pacific island countries, labeling it as a model of South-South cooperation.