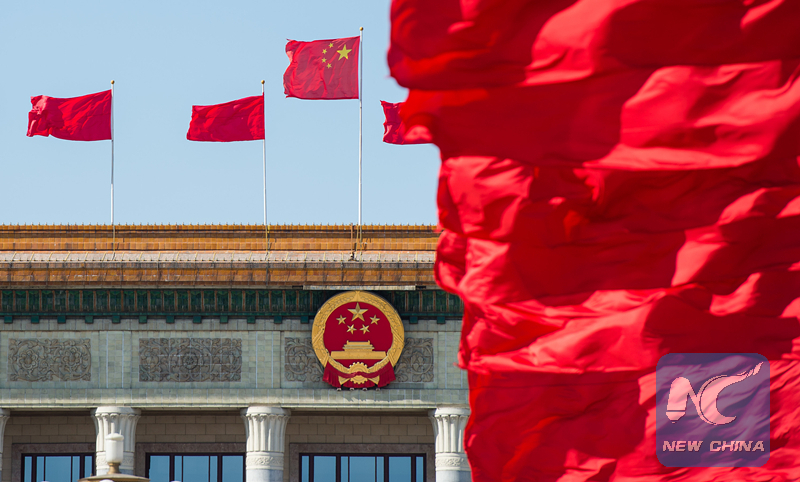 Red flags on the Tian'anmen Square and atop the Great Hall of the People in Beijing. (Xinhua photo/Li Xiang)

BEIJING, Dec. 18 (Xinhua) -- Chinese President Xi Jinping received the credentials presented by new ambassadors of seven countries to China at the Great Hall of the People in Beijing Tuesday.

Xi welcomed the ambassadors to China and asked them to convey his sincere greetings and good wishes to the leaders and people of their countries.

China will strengthen cooperation with all countries, jointly undertake the Belt and Road Initiative, elevate bilateral ties to a new height and make greater contributions to world peace and common development of humanity, Xi said.

He said the Chinese government will provide convenience and support to the new ambassadors' work and expressed his hope that they will help facilitate bilateral relations between China and their respective countries, and the friendship between the Chinese people and the people of their countries.

The ambassadors conveyed cordial greetings from the leaders of their respective countries to Xi, and spoke highly of Xi's remarks made during a grand gathering Tuesday morning celebrating the 40th anniversary of China's reform and opening-up.

The ambassadors said their countries will continue to support and participate in China's reform and opening-up process, which has provided the world with huge opportunities, and jointly promote international cooperation under the Belt and Road Initiative.

The ambassadors pledged to commit themselves to enhancing exchanges and cooperation between their countries and China during their tenure in China.