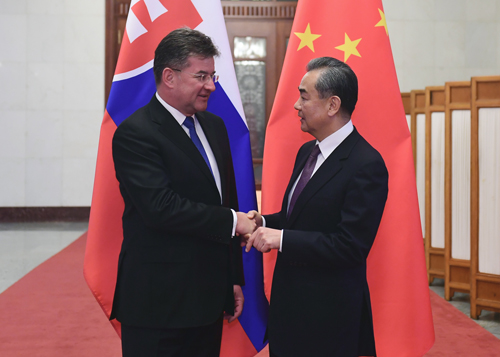 On April 24, 2019, State Councilor and Foreign Minister Wang Yi met in Beijing with Minister of Foreign and European Affairs Miroslav Lajčák of Slovakia, who was in China for the second Belt and Road Forum for International Cooperation. (File photo: Embassy of China)

China maintains that all countries, big or small, are equal, and is dedicated to jointly building a community of shared future for mankind through international cooperation, said Wang.

In the face of the rise of unilateral protectionism, nations across the world should uphold multilateralism, and jointly safeguard international laws and rules as well as the multilateral system with the UN as the core, he said.

China attaches great importance to the constructive role Slovakia plays in the UN, the European Union (EU) as well as the cooperation between China and Central and Eastern European Countries (CEEC), he said, adding that China is willing to maintain close communication with Slovakia, and be a good friend and good partner, with both sides respecting and trusting each other, and jointly building the Belt and Road.

Lajcak said his country supports China's peaceful development, firmly adheres to the one-China policy, and fully respects China's sovereignty and territorial integrity, to ensure the stable and healthy development of bilateral ties on the basis of mutual respect, equality and mutual benefit.

Slovakia is willing to avail itself of its geographic advantages to actively take part in the joint building of the Belt and Road, and keep the non-discrimination principle when dealing with Chinese enterprises' participation in 5G construction, he said.

Slovakia will continue to play an active role in China-EU cooperation and China-CEEC cooperation, which are complementary, said the Slovak foreign minister.

He said his country firmly supports multilateralism, and advocates dialogue and cooperation among nations, so as to properly handle differences and jointly cope with challenges.

Slovakia is willing to enhance communication, coordination and cooperation with China, he added.