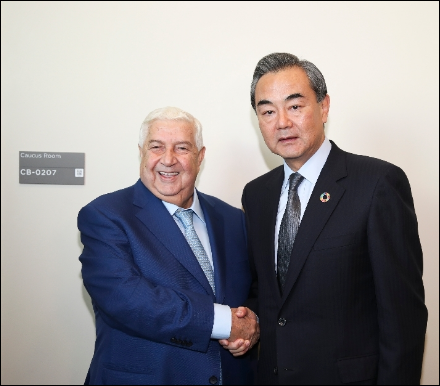 Wang made the remarks when meeting with Syrian Deputy Prime Minister and Foreign Minister Walid Muallem at the United Nations headquarters.

He said China is pleased to see the situation in Syria is developing steadily with the efforts made by the Syrian people.

China has always held that the Syria issue should be solved by political means following the principles of Syrian leadership and Syrian ownership, Wang said, adding that China has always called for respecting the sovereignty, independence and territorial integrity of Syria.

China attaches great importance to Sino-Syrian relations, will not be absent from Syria's reconstruction and is ready to play a positive role in the economic and social development in the country, said Wang.

Also, China appreciates Syria's active engagement in the Belt and Road Initiative and would like to take this opportunity to promote further economic exchanges, he said.

Echoing Wang, Muallem said that Syria treasures its friendship with China which is a major country with global influence, adding that his country commends China's constructive role in pushing for peace and stability in Syria and in mitigating the humanitarian situation.

Syria is ready to advance cooperation with China in a wide range of areas and positively participate in the joint construction of the Belt and Road, injecting new impetus into bilateral practical cooperation.

Wang and Muallem met on the sidelines of their attendance at the 73rd session of the UN General Assembly in New York.